Michael was born in NJ, grew up a short distance from New York City and did not go until he moved there for college. Now back in NJ with his husband and two kids, he is a happy commuter - part-time stay-at-home Dad and part-time publishing event planner. After a significant weight loss, Michael has taken up running, spends a lot of time in Spin class and is not afraid of spandex. He and husband, Vinnie, chronicled their adoption process at 2dads1family.blogspot.com. They visit Walt Disney World far too often and their kids may or may not think every plane goes to Orlando.

In what has become a far too regular ritual, my heart aches as news of a black man being shot by police in questionable circumstances overwhelms my TV, Facebook feed and basically, my consciousness.

From Obese Dad to Fit Dad: My Kids Motivated Me to Turn My Life Around

Let me just say it outright: I used to be morbidly obese.

I don’t say fat – that’s one of those words that can be taken wrong. I want to be clear and medically accurate. I had a BMI of 48.7. My activity level was on the lower side of OK but my calorie intake was through the roof. And it just kept getting worse.

My turning point was a year after our first adoption when the very unplanned placement of our son turned our world upside down. For one of the adoption requirements I had to pass a medical screening. During the exam my blood pressure was found to be so high that I wasn’t allowed to leave the  doctor’s office until it went down. I had to agree to take medication and come in for a follow-up screening in order to get my medical clearance.

Months went by of failed attempts at losing weight. The blood pressure medication added an odd level of exhaustion on top of an already stressful time. I sank to a level of self-loathing that could have developed into a depression had I not had a new and growing family around me.

I saw my own story played out in the words of an advanced copy of the novel “Skinny” by Donna Cooner, which I was reading for my job at a publishing company. I recognized myself, self-loathing and all, in the main character of Ever who steals away to guiltily eat candy and then detests herself for it. To combat her obesity, Ever undergoes bariatric surgery and, through a lot of work and support, she eventually conquers her demons. 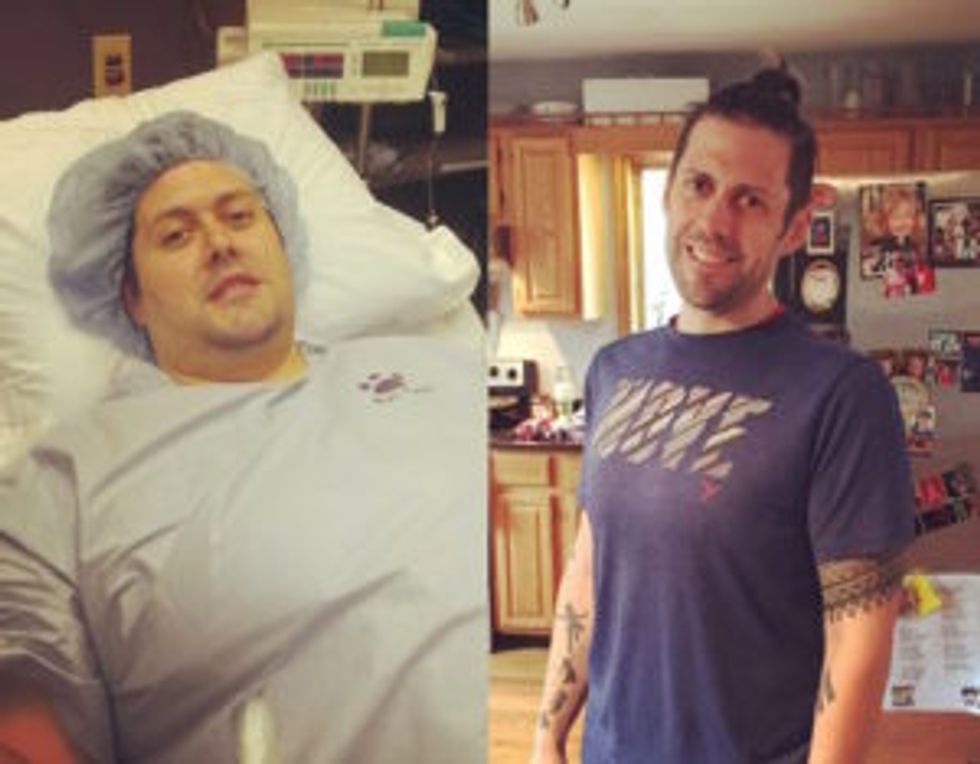 As much as I hated to admit it, I knew I couldn’t conquer my obesity on my own. Soon after I finished reading “Skinny,” I went to see the doctors at the New Jersey Bariatric Center.

You see, I had something more than self-loathing in my life. I had a blossoming family – and they were everything to me. I knew that I could continue on as an obese dad and miss parts of my kids’ life that I would never get back. Or I could change.

And I did! I had my surgery three years ago on May 1 and have since lost half of my highest body weight. As a result, my blood pressure has come down and I have long stopped taking the medication I once so badly needed. For the first time in my life, I feel truly healthy. The surgery was a great tool but my ongoing health required permanent changes to more than my stomach. My mind and body have been transformed. I developed new healthy habits, and I’ve also realized that the gym is not nearly as scary as I once thought.

Beyond my personal health, though, I know I am a better dad today than I ever could have been three years ago. I have two very active kids. When my five-year-old daughter starts running, I can see her raw athleticism; I am convinced my son is destined to be a gymnast. These may be the daydreams of a proud father or they may be realistic visions of the future. Their abilities may be inherent, or they may be encouraged by my own good example. It could be somewhere in between the two; I can’t be sure.

The one thing I can be sure of, though, is that I can foster them. I can be fully present as they shape their own lives and know that their own health will not be risked by my bad habits.

The 7 Best Things About Family Vacation

My family just came home from a wonderful 10-day trip. That’s a long vacation, especially with a 3 and 4-year-old. For most kids and adults, that is a long time to be out of routine and admittedly, there were some moments where I needed that extra cup of coffee. A vacation is so much more than a break from routine, though. It’s a chance to reconnect, to reassess and of course, relax!

How a Song, a Dance and a Boa Changed My Life

The director had told me to take Reno’s boa, swing my hips and let go.

Being a Public Family

I think we’ve all probably had those moments – the sideways glance, the double-take over the shoulder or the stare. It’s part of life and at this point, I am almost oblivious to it.

If every toy ad on TV didn’t remind you already, let me state the obvious.

Boy Stars in New Barbie Commercial – yes it got my attention when that headline showed up in my Facebook feed.

In Fairy Tales, a Gay Man Finds Acceptance and Love

Gays With Kids is pleased to introduce Michael Strouse, our newest blogger. This is his first blog post.

Interested in Surrogacy? Check Out These Bay Area Events This Weekend