Just before his first birthday, our son’s nanny gave her notice. How could she do this to us? To him? We were finally in a groove and able to fully trust someone with our little man. We had our routine down, and he was thriving. Now this.

As we began the tedious task of finding a new nanny, my partner and I struggled with the decision that many families face. Why were we paying someone to spend 60 hours a week with our son? Why were we both traveling so much, literally passing each other in the airport at times? Why were we working to pay for childcare? Instead of focusing on what we would look for in the next nanny, we had a different conversation. What would happen if one of us stayed home? Through his unwavering support, I decided to take a step back at work and stay home with our son.

It’s been three months, and my fear of failure is stronger than ever. I’m not sure that it will ever go away. It sneaks up on me at odd times throughout the day. However, there is one thing that comforts me when I find myself wanting to crawl into the fetal position — my son. I’m home with our son. I get to be stay-at-home papa.

In the time that I’ve spent with him, I’ve observed some very interesting behaviors. I’ve researched child development practices and studied modern day parenting techniques. I’ve observed other parents in their natural habitats, such as little gyms, music classes and parks, to name a few. When I talk to other parents, I see the sense of pride that washes over them. They believe that their child is the most gorgeous, super-advanced, highly intelligent little person that has ever existed.

And, I agree with them.

Children are incredible creatures. They possess an inordinate amount of super powers that are easily missed if we aren’t looking. I’m convinced that our son is no mere mortal. He’s come to save the world, or at least me.

Here are just a few non-human characteristics that I have observed in our son in three short months:

Superhuman strength. There is no other explanation. Now that he can walk, he does not want to explore the world in a seated position. It takes two dads (both over 6 feet tall) to get him in to his car seat or stroller. He arches his back, straightens his legs and locks his arms. He’s mother-effing Superman. But, stronger.

Scaling walls. Most parents learn quickly that too much quiet is not usually a good thing. I was a bit slow on the uptake, but now I know. If he’s ever too quiet, I know he’s probably perched atop some bookcase, dresser or table. He hasn’t quite figured out the meaning of up and down. (He says down when he wants you to pick him up.) Yet, from the minute he wakes up, he’s climbing something, anything. 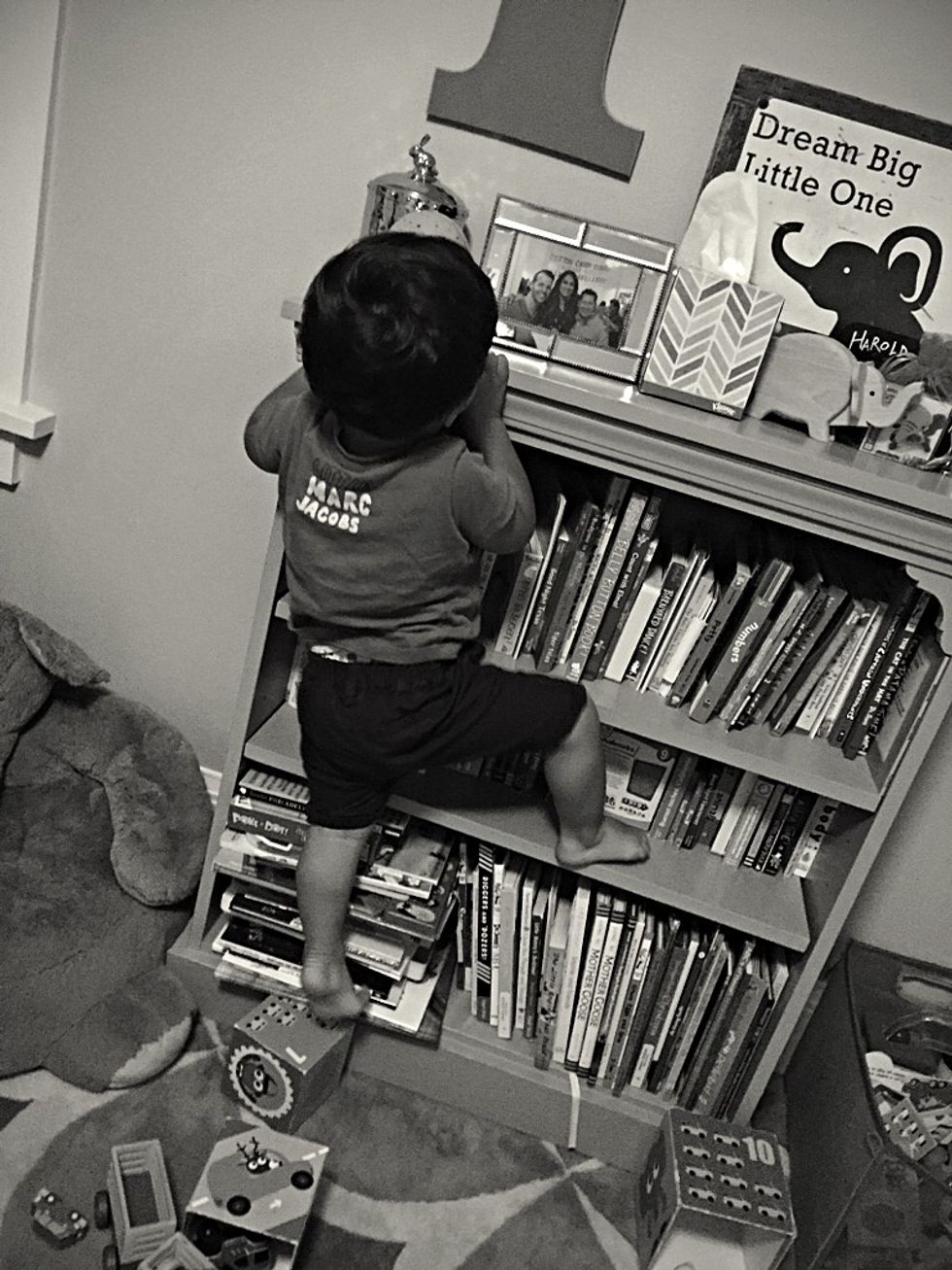 Superhuman hearing. He wakes up in the morning around 5ish. I lay there perfectly still, because if he doesn’t think I’m awake, he’ll lay back down and go to sleep. My noses itches. I reach up to scratch it. He’s up.

Elasticity & Lightning Fast Speed. Putting his clothes on in the morning, when he’s on the move, should be considered an Olympic sport. If only I had superhuman endurance. I’m tired just thinking about it. When I turn around to grab his pants, he’s usually climbed on top of a table, or chair, or bus. 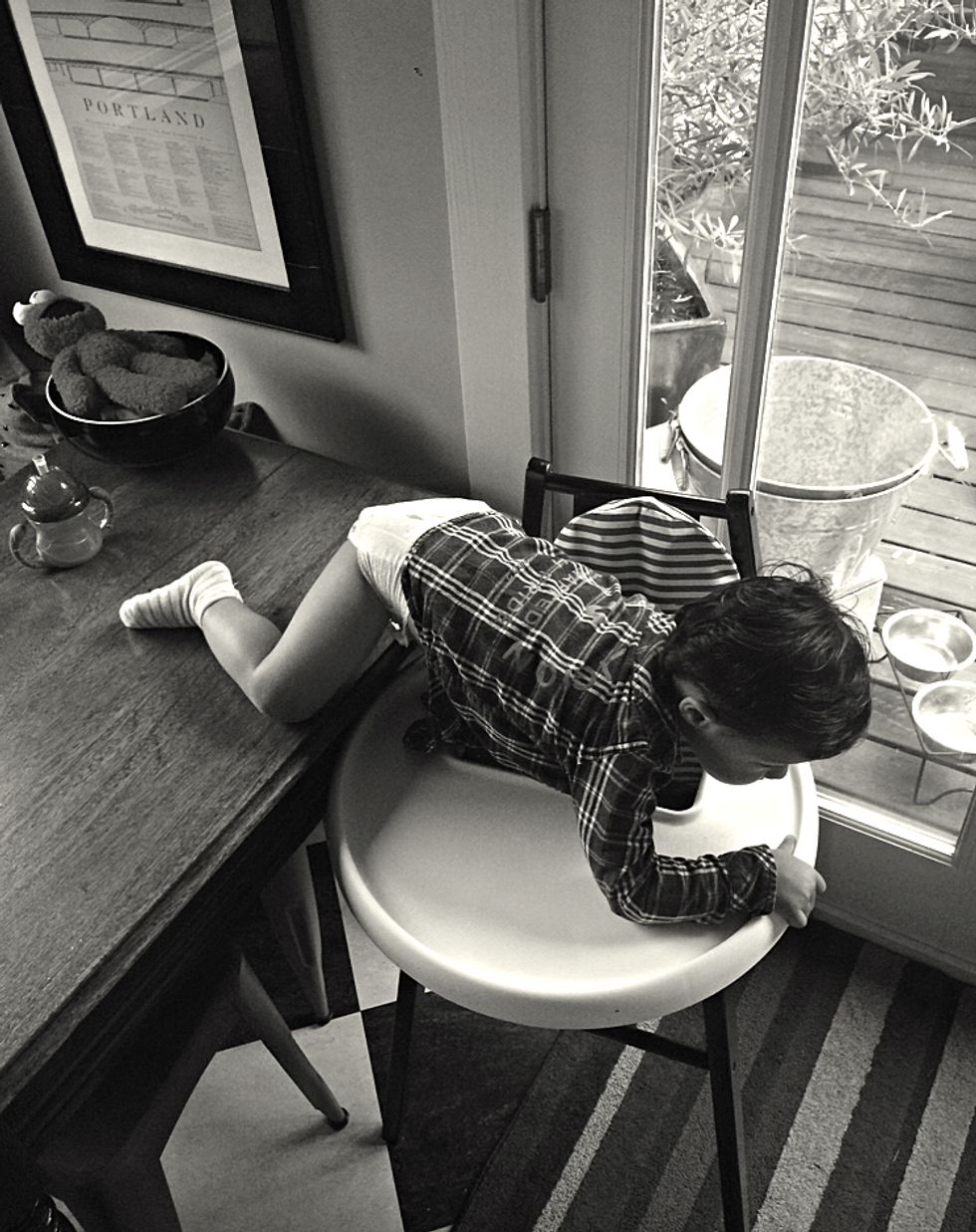 Teleportation. It’s the only thing I can think of since he’s learned the word no. In the morning, we often run through the entire contents of the pantry.

“Do you want cereal?"

“Do you want oatmeal?"

“Do you want these crackers?"

“Do you want fruit?"

So, he gets it. He understands it and uses it in the appropriate context. However, five seconds after we’ve figured out what he wants to eat, he starts feeding the dogs his banana. He starts climbing out of his high chair. He starts scratching the table with his fork. When I say no, he’s suddenly and instantly transported back to a time where he’s never heard that word before and has no idea of it’s meaning.

Memory manipulation. There’s no denying that life with a jubilant, energetic, wildly curious and exceptionally strong-willed toddler can be exhausting and a times a tiny bit frustrating. However, when he grabs your face, turns you toward him with his little hands and gives you the biggest hug (with his superhuman strength), everything is forgotten in that moment. You should see the smile we get after we’ve wrestled him into his car seat. Oh, he’s good. 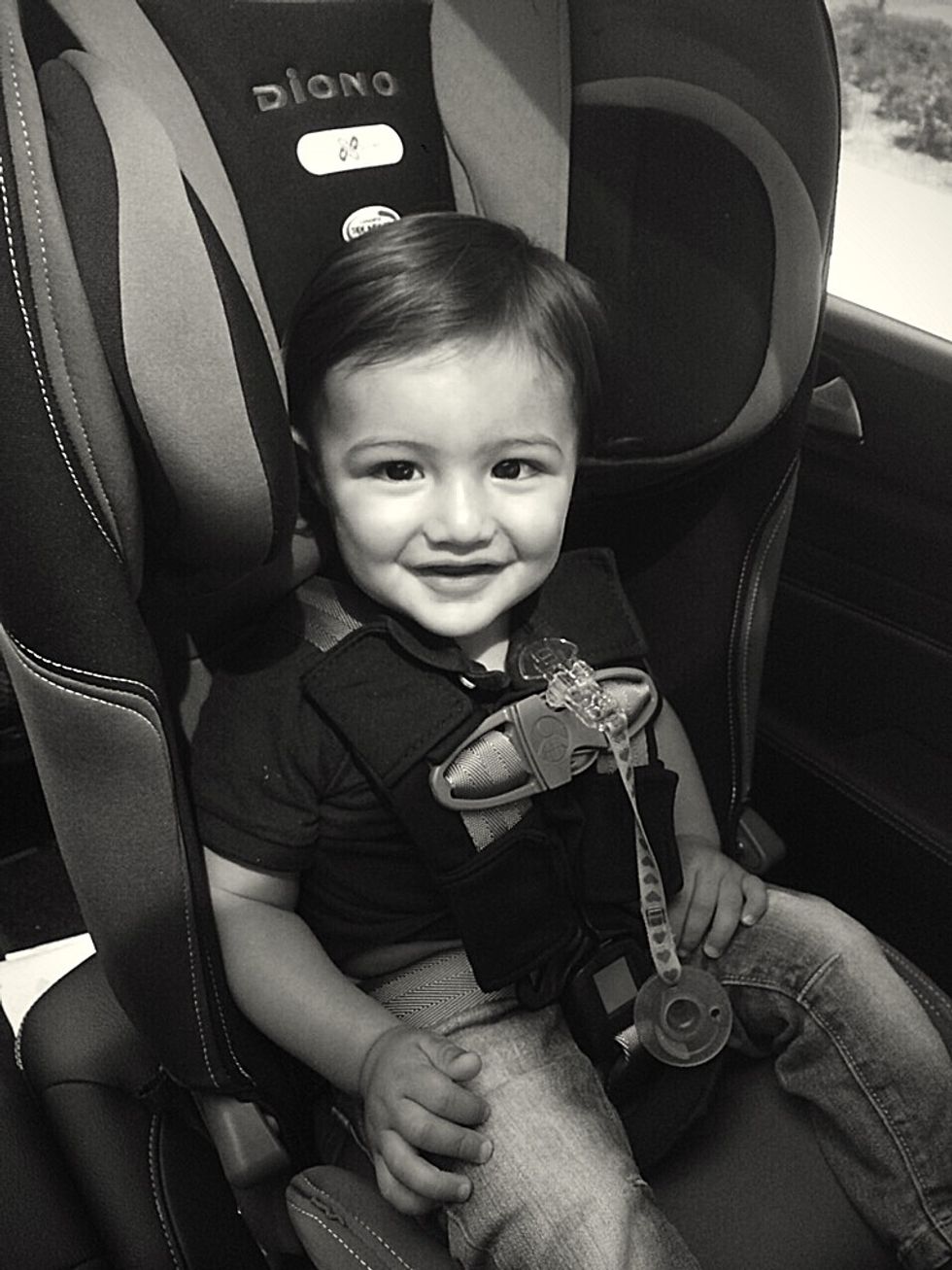 Precognition. This is his ultimate ability. He knew when we went through traumatic adoption situations that didn’t work out, that it was just preparing us to appreciate life with him. He knew the tears, struggles and unimaginable pain would all be worth it. That his two dads would love him that much more deeply. He knew before he was born, that he would be the one to help two dads create a family they felt was unfathomable.

I’m convinced that my job as the stay-at-home papa is to help him unleash these powers. I want him realize that he can be anything, do anything, accomplish anything that he wants in this life. He just has to look inside. I may not get the laundry done, forget what time music class starts and dress him like a vagabond at times. After all, I’m only human. But, if I can help my son embrace his superhuman powers, then perhaps I’m doing a pretty good job.

Wait, where did he go?