Before becoming the dads they are today, Daniel and Dennis’ biggest doubt on the path to fatherhood was whether they could afford surrogacy or not. It seemed impossible at first.

They had discussed adoption but decided to pursue surrogacy after attending a seminar for gay men wanting to become dads. Reminiscing about when they saw two dads with twin babies, they remember thinking how amazing would that be if we could do it? 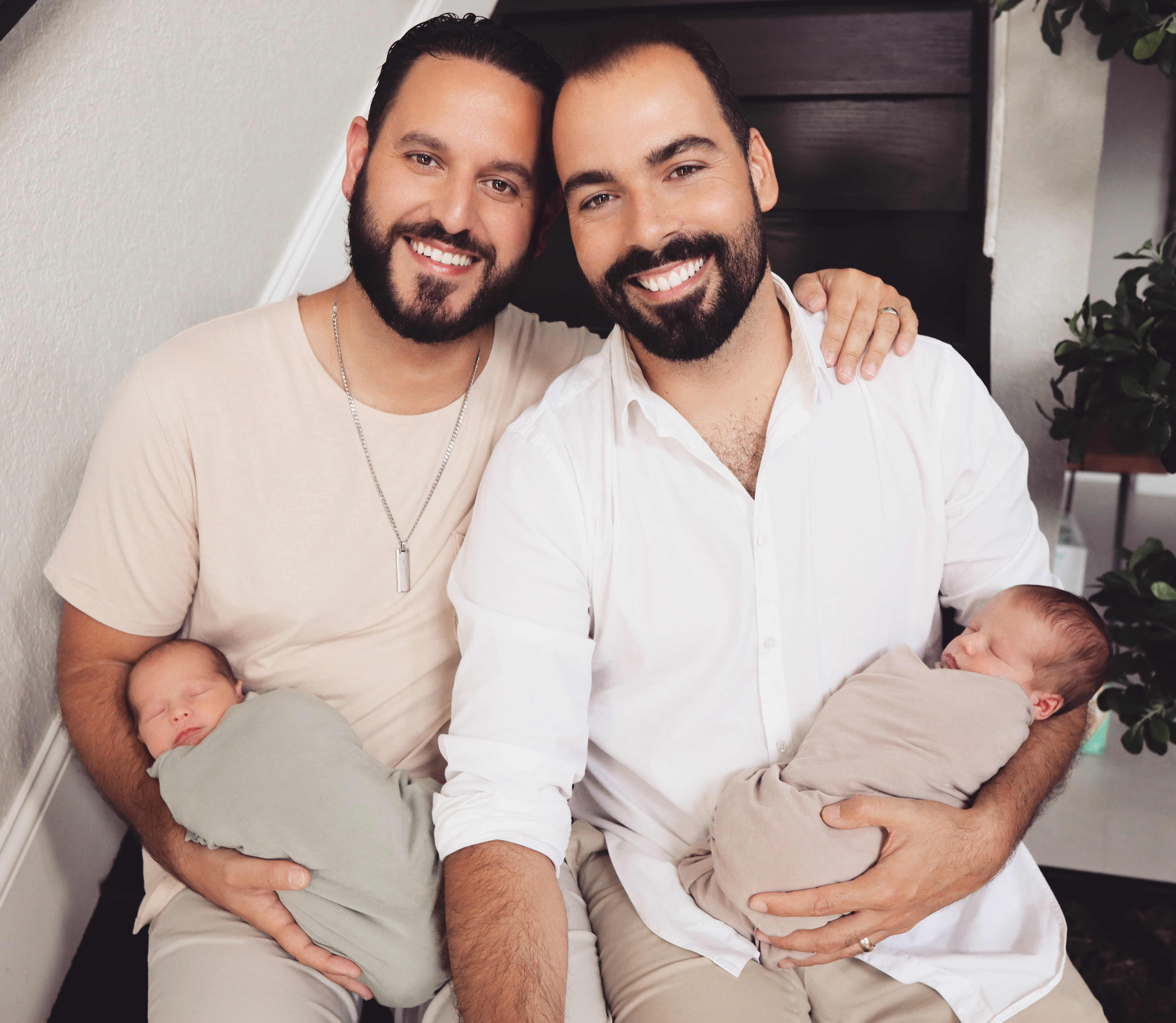 Daniel and Dennis never thought in their wildest dreams it would actually happen that exact way, with twin boys, one biological to each of them.

The couple met through Tinder, chatted on a Sunday and decided to meet up the very next day for a date. Lasting more than five hours, it was clear these swipers were soulmates. It wasn’t long until they both deleted the app - the rest is history.

From that very first date, the couple discussed whether they wanted marriage and children.

“Having children was something we always dreamed of and wanted to become a reality.”

After attending the Men Having Babies seminar, they learned what costs to expect. Even with two jobs, it was a tough pill to swallow. Empowered by love, they figured it all out and were able to make it happen. Giving up quite a bit of everything, grabbing loans wherever they could and creating a very tight budget and sticking to it - they did everything they could.

With all the chaos to come out of 2020, some happiness was welcomed and their family expanded at the start of July. It was worth it for the end result; their beautiful boys, Dean and Devin.

Their surrogate lived in central Florida, with the dads situated in the south of the state. She contracted for a few hours which allowed them to make the 4 1/2 hour drive up to the local hospital. They got there just in the nick of time.

As soon as they arrived, they changed into surgical outfits and followed the surrogate and her fiancé into the OR, where she pushed for nearly 15 to 20 minutes and the first boy, Dean, was born. Within four minutes, baby Devin was welcomed into the world too.

Each dad was able to share the beautiful moment of cutting the umbilical cord for each of the babies.

“It was so fast paced and surreal we didn't get to take it all in until hours later.”

Born premature at 34.5 weeks, the twins needed to be whisked away immediately into the NICU, which was hard for the new dads who just wanted to snuggle their sons. Devin was also having breathing difficulties, but thankfully, the dads were able to stay with them for the entire 14 days.

“We're very 'glass half full' type people and try to put things into perspective and believe that things happen as they are supposed to. We were able to bond with them, fall in love every time we saw them and see them grow and improve almost minute by minute.“

During the two weeks, they also learned how to care for their new family, which was very important for them as first time dads. The couple beamed, “It was truly an incredible experience. After 14 days in the NICU, they were ready to go home and start the rest of their lives with their dads. We couldn’t be happier.”

When we asked Daniel and Dennis what adversity they faced on their path to fatherhood, they had some very honest truths to deliver to eager dads.

“Deciding to start the process and find the correct path was very difficult. There are many agencies and IVF clinics out there that are sketchy and just want to monetize as much as possible with zero promises.”

Through their own experience, they learned you have to follow their gut, even if it meant cutting ties with their original donor and continuing the pursuit elsewhere at a more reliable clinic.

“We also would advise to never lose hope, because even things that seem impossible can become reality. Educate yourself and speak to as many people as possible and take in all the advice and then make the best decision for yourself.”

Fortunately, the couple surrounds themselves with an incredible group of friends that love and support them with every decision they made. Their family is also very accepting and Daniel's mom is lesbian and married, so they’re open and accepting to love in every form.

They admit they do receive a few negative comments on social media, but recognize it’s mild in comparison to what others have faced before them. Plus, they’re united and passionate about rising above it.

“We won't let that get in the way of the incredible progress that has been made for the LGBTQ people.”

Ultimately, the reason Daniel and Dennis are sharing their journey with us now is that stories like these actually inspired their own process. Because of that, they wanted to give back to anybody else also looking for guidance and support during those moments of difficulty when becoming a dad. So much so, they’re actually launching a YouTube channel dedicated to just that. Stay tuned, I’m sure we’ll be seeing a lot more of these dadvocates.

In the meantime, if you want to give back to the community like Daniel and Dennis, we’d love to hear your family story. Just get in touch with us using the button below.

How Dads Do Distance Learning

Top Moments for Queer Dads in 2020

2020 Wasn't ALL Bad — These Queer Dads Grew Their Families!

The Christmas That Started 'The Rest of My Life'

These Gaymers Just 'Leveled Up' to Fatherhood

This Dad Life: Farm Day with Dads Ryan and Chris