Early May has always been about tough choices for the Fisher-Paulson family.

For six or seven years, our sons have walked into class, and a very kind teacher has handed them pink construction paper, paper doilies and crayons and told them to make a Mother’s Day card. Now, my 11-year-old Zane is pragmatic, so he drew little attack ninja warriors shooting flames out of their skateboards, a word balloon over one of the ninjas shouting, “Happy Mother’s Day! I love you Daddy!”

But Aidan is less easily swayed.   “I am not doing this,” he announced each year, “I have two Daddies.” And each year, the teacher said, “Well, we’ll just make a card for your Grandmother.”

“You mean Nana,” he corrected. And so he drew lightning bolts and red-tailed hawks, and spelled out, “I luv u Nana.” And Nana, God bless her, put each and every card up on her refrigerator.

In May 2002, my mother, Nurse Vivian (see photo above), passed away from ovarian cancer. She died on a Wednesday, and on Mother’s Day, I gave her eulogy. In an eerie coincidence, last year, my husband’s mother, whom the boys called Nana, passed away in the early morning hours of Mother’s Day from brain cancer.

So this year, there is no Mother. There is no Grandmother. There is no Nana.   To make matters worse, the godmothers went off on a trip to Scotland. There are only the two sons, the two fathers, the three male rescue dogs, and one aging Pekingese (Qp) who is the only source of estrogen in the blue bungalow on Winding Way. And Qp has no appreciation for greeting cards, unless they are wrapped in salami.

In this great Gayby Boom of the 21st Century, we still have to figure out the holidays. I imagine that our lesbian neighbors down the block have the same sort of problem with Father’s Day, even though it has always been a second class kind of holiday, a consolation prize important only to Hallmark Cards and the purveyors of ugly neckties. By Father’s Day, most schools have let out, and so no teacher tells the students to take blue construction paper and make a card. And so Zane and Aidan have never really embraced Father’s Day, never woken up early to burn pancakes and pour orange juice for breakfast in bed.

I miss my mother every day. I miss Nurse Vivian’s lemon meringue pie, or the way that she fed Captain Crunch cereal to the birds in wintertime, or the fact that she sewed a miniature tuxedo for me for my kindergarten pageant. I miss the fact that Nurse Vivian thought that I would one day be a writer. And someday I will. 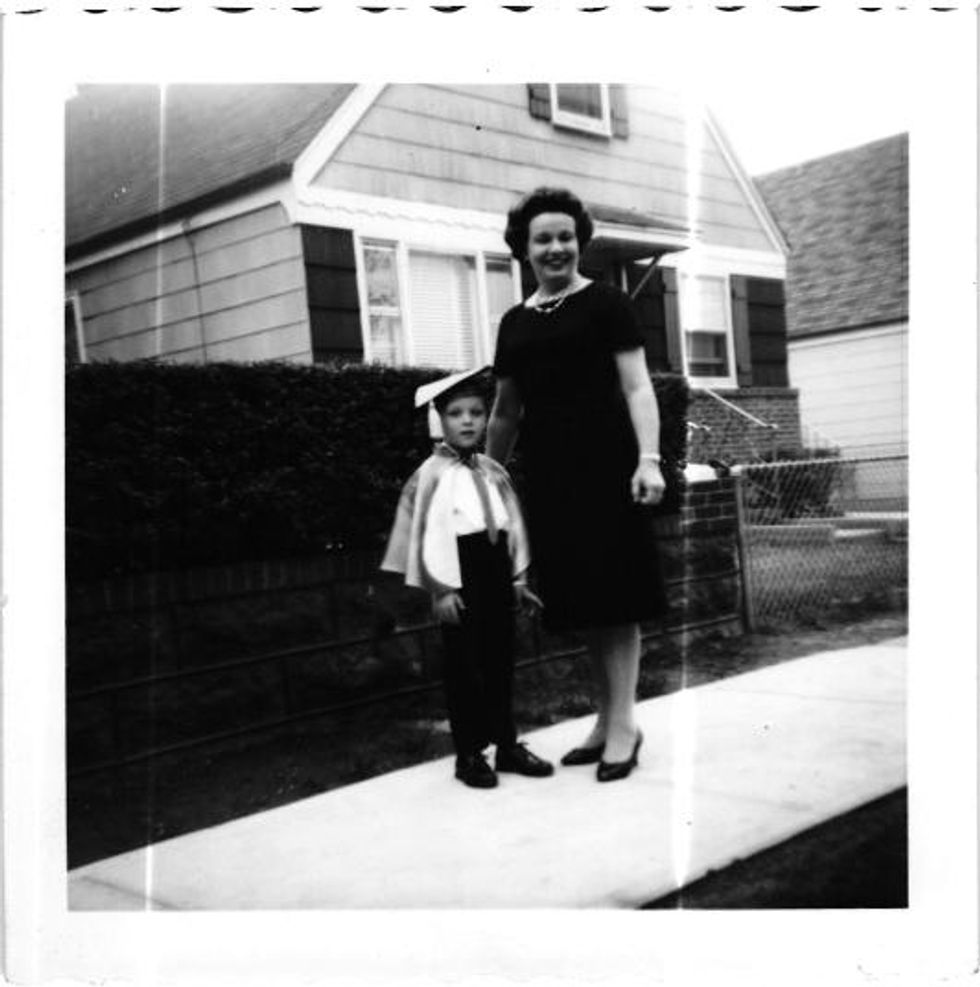 Kevin and his mom, Nurse Vivian

In fact, it is a testament to Nurse Vivian that I have become a mother/father. From her I get the nurturing part of my nature, the willingness to bake cupcakes for the school drive, and make Borax crystals for Aidan’s science project, or sit on the rocking chair with Zane on my lap when he has scraped a knee. Because of Nurse Vivian, I can still be a tough cop and then go home to needlepoint a First Communion banner. And for that I miss her.

But we are Fisher-Paulsons. We honor what we have lost, but we celebrate what we have. So this year, we decided to celebrate the feminine, the nurturing women who have influenced them, the sixth grade teacher, and the woman who runs the cafeteria and the neighbor who plays Uno with them. We are baking pumpkin pies for the neighbor who rescued one of our rescue dogs, and drawing cards for the aunt who always send us postcards.

Two competing bills — one backed by Governor Andrew Cuomo and another by Senator Liz Krueger with stricter provisions — are aiming to legalize surrogacy in New York.

Governor Andrew Cuomo of New York is once again attempting to legalize commercial surrogacy in the state, which is still just one of three states in the country to forbid the practice.

"This antiquated law is repugnant to our values and we must repeal it once and for all and enact the nation's strongest protections for surrogates and parents choosing to take part in the surrogacy process," Governor Cuomo said in a statement in announcing a broader effort called Love Makes a Family. "This year we must pass gestational surrogacy and expedite the second parent adoption process to complete marriage and family equality."

Your Marriage Should Be Gayer, Says the New York Times

In an op-ed for the New York Times, Stephanie Coontz, author of "Marriage: a History," lists the many insights LGBTQ marriages can offer straight ones.

According to a fascinating op-ed in the New York Times this week by Stephanie Coontz, author of "Marriage: a History," turns out the people convinced marriage equality — legal across the United States for five years now — would usher in the complete breakdown of civil society should be more worried about the health of their own marriages.

In the article, Coontz details the results of research that followed 756 "midlife" straight marriages, and 378 gay marriages, and found same-sex couples reporting the lowest levels of physiological distress — with male gay couples reporting the lowest. The reason for this, the author said, is pretty simple — misogyny. The idea that men and women should strive for parity in a relationship is still a fairly new idea, Coontz said, and traditional gender roles are still pervasive. Gay couples, meanwhile, are free from such presumptions, which often results in happier, healthier relationships.

The most interesting findings in the research relate to parenting. While gender norms tend to be even more emphasized among straight people once they have children, with the bulk of the childrearing falling to mothers, same-sex couples — once again freed from the stereotypes of the male/female divide — parent more equitably. As the author notes, "A 2015 survey found that almost half of dual-earner, same-sex couples shared laundry duties, compared with just under a third of different-sex couples. And a whopping 74 percent of same-sex couples shared routine child care, compared with only 38 percent of straight couples."

When it comes to time spent with children, men in straight marriages spent the least amount of time and the lowest proportion of "nonwork" time, with their children — while men in same-sex marriages spent just as much time with their children as women in a straight relationship. "The result?" Coontz writes, "Children living with same-sex parents experienced, on average, three and a half hours of parenting time per day, compared with two and a half for children living with a heterosexual couple."

One factor, the author notes, that can help explain this difference is this: gay parents rarely end up with an unintended or unwanted child, whereas a full 45% percent of pregnancies in straight relationships in 2011 (the last year data is available) were unintended, and 18% were unwanted.

The 'Strange Dichotomy' of Dating as a Single Gay Dad

A single gay dad describes the balancing act involved with dating after having come out later in life.

It was a Friday morning as I walked towards the twins' bedroom door, and I caught the dreaded whiff. The unmistakable smell of fecal funk. My heart sank — I knew exactly what awaited me on the other side. As I cracked the door open, my assumptions were immediately confirmed. Our resident two-year-old "scat princess", a.k.a. Maren, had pried off her poopy diaper and painted her bedroom walls and doors in her own excrement for the third time in as many weeks. I couldn't decide if I wanted to scream or cry. Fortunately my dad superpowers immediately took over and I did neither. I simply gritted my teeth, smiled, threw open the door and uttered "good morning, girls!" I spent the next hour giving the toddlers, the walls and the doors a Silkwood scrub-down. Again.

Fast-forward twelve hours later. The kids were safely with their mom for the weekend, and I was out on a date with a handsome guy I met on Tinder. The trauma from earlier in the day a mere, faint memory. This was the strange dichotomy of my life as a single gay dad. Balancing dating in the midst of coming out later in life, never mind the whole parenting thing, is a struggle. And, one that nobody really talks about.

How One Failed Adoption Turned Into Two Successes for These Dads