Happy Gay Uncles Day to All the Fabulous 'Guncles' Out There!

Everyone knows that the gay uncle is always the favorite uncle — so thank goodness the Internet created a super official made-up holiday to celebrate all the amazing good gay, bi and trans men bring to the lives of their nieces and nephews. Enjoy the round-up below of some of our favorite Guncles. 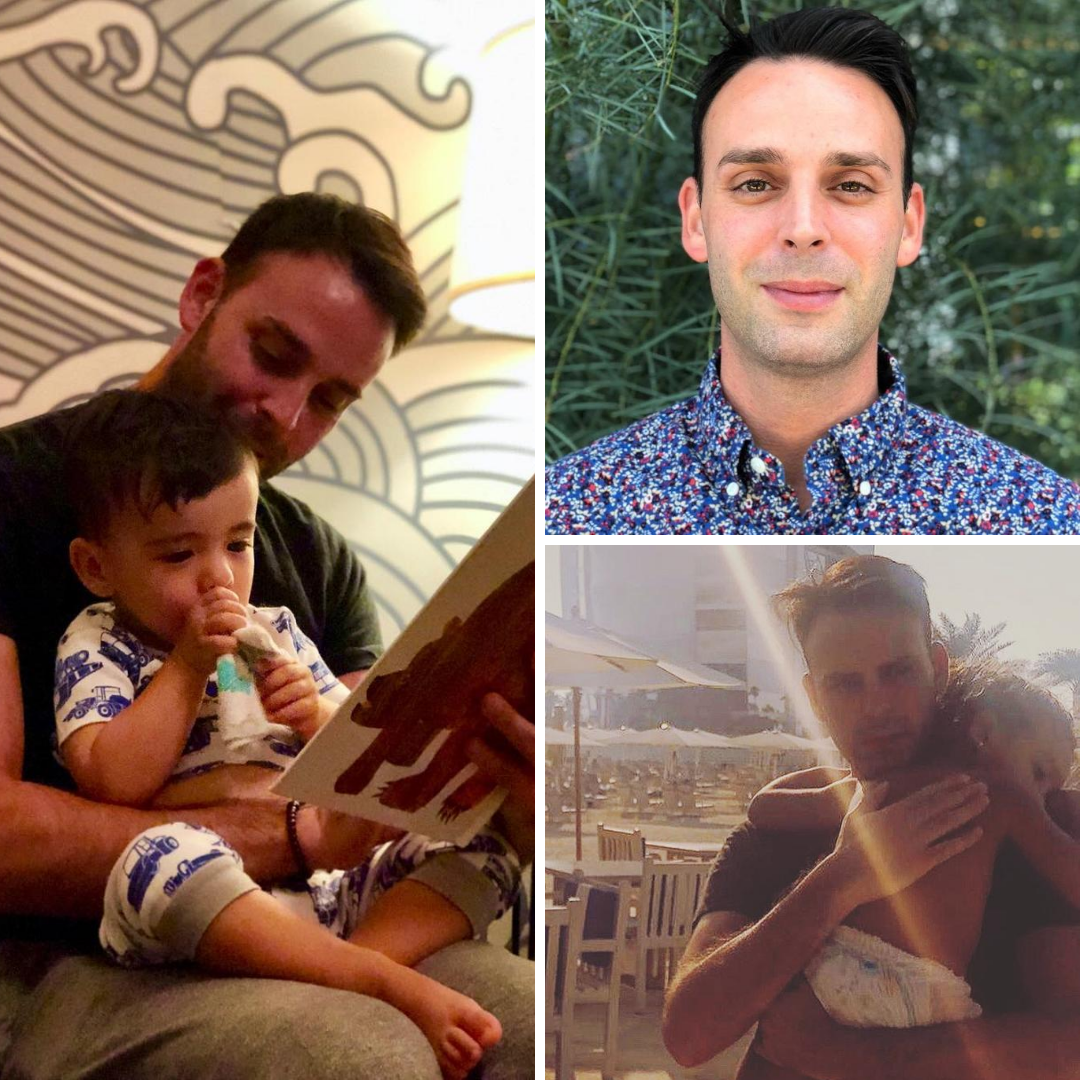 Kyle Pleva, 33, from Los Angeles, California, feels fortunate to be called "guncle" by numerous nieces and nephews - the children of both gay friends and straight couples. "It's a joy to feel the love!"
"I am the resident babysitter, volunteering to take the kids to give the parents a much deserved break and selfishly gives me a chance to practice for when I have my own children."
Kyle indulges his honorary nieces and nephews in all sorts of fun activities including baking, dancing, singing, reading, and "of course, snack time - the best time!"
Does Kyle see fatherhood in his own future? "I was put on this earth to become a parent and am looking forward to how that plays out. Fatherhood on your must list too? I'm your guy!"
***

"They bring us so much joy and their energy is contagious" 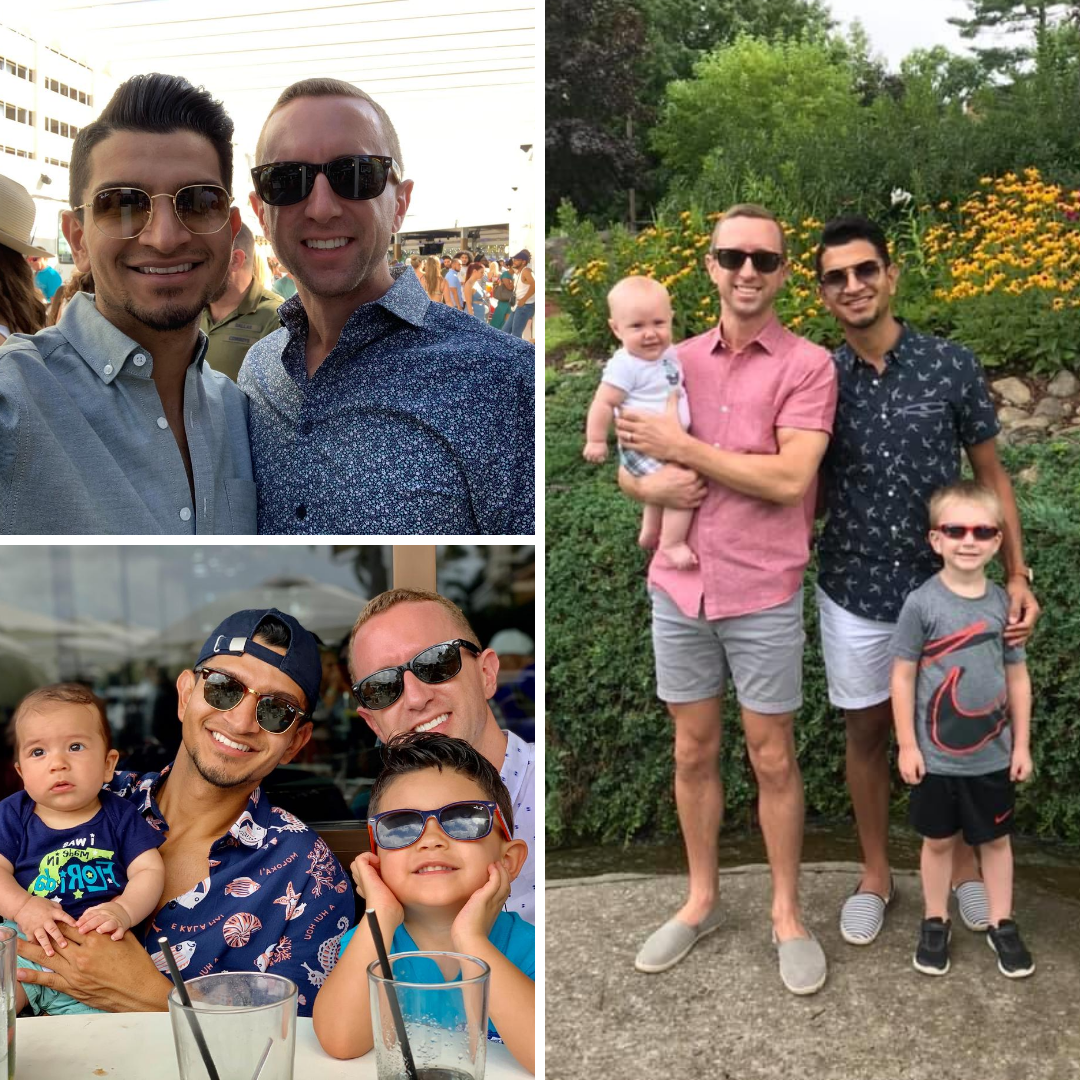 For Daniel, 33, and Jean Russell, 31, from Fort Lauderdale are celebrating Guncles Day for the first time despite being gay uncles for a few years.
"We love being able to experience life through their eyes and be a part of their upbringing. We love to introduce them to things, foods, and experiences they wouldn't otherwise. And of course we love spoiling them!"
Daniel and Jean are the quintessential gay uncles to their nephews. "We're the fun uncles who maybe let them do things their parents wouldn't, but we also love teaching them and introducing them to new ideas, things, and places." The husbands send them a KiwiCo box and love helping them with the projects inside.
These men love being being uncles and appreciate the special place a child holds in their hearts. "So as far as us becoming fathers, we'll have to see what the future holds."
***

"Children love us for who we are" 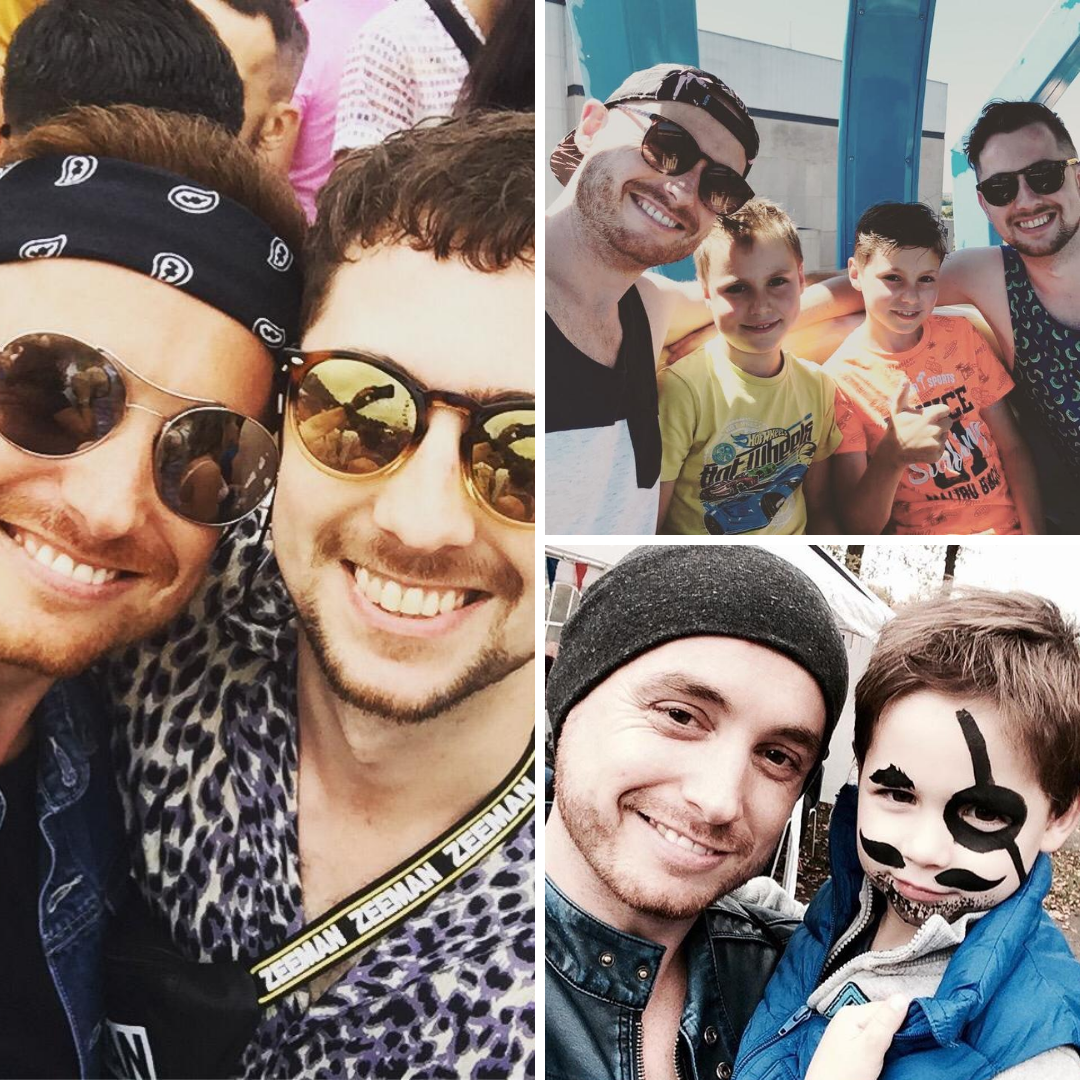 Peter, 36,  and Martijn, 27, have been together 7 years and live in Eindhoven in the Netherlands. Peter has two sisters, one has three children, and the other has two, making Peter and Martijn proud gay uncles to five nieces and nephews.
The boyfriends don't live too close to their nephews and nieces but they make up for that when they do. "The most beautiful thing about being an uncle is the smile I see on the faces of children when they see us again. They are already waiting for us and run towards us to give us a big hug and kiss."
"What I also like is that the children love us for who we are. They don't know any better that two men can love each other and so they think that's very normal. A lot of people can learn from that."
Peter and Martijn take their role as guncles as an opportunity to show their nieces and nephews that anyone can love one another regardless of gender. "The parents tell the children this too, but we also like to take on that role. Sometimes we get a drawing of the children. They have drawn us with a rainbow. Those are the nice details."
Lately Peter and Martijn have been talking about becoming dads. They've started researching the different paths but finding others to talk to in their same situation has been tough. "But I am convinced that we will be two great fathers who have a lot of love to give," said Peter.
***

"I get to be the fun adult in his life" 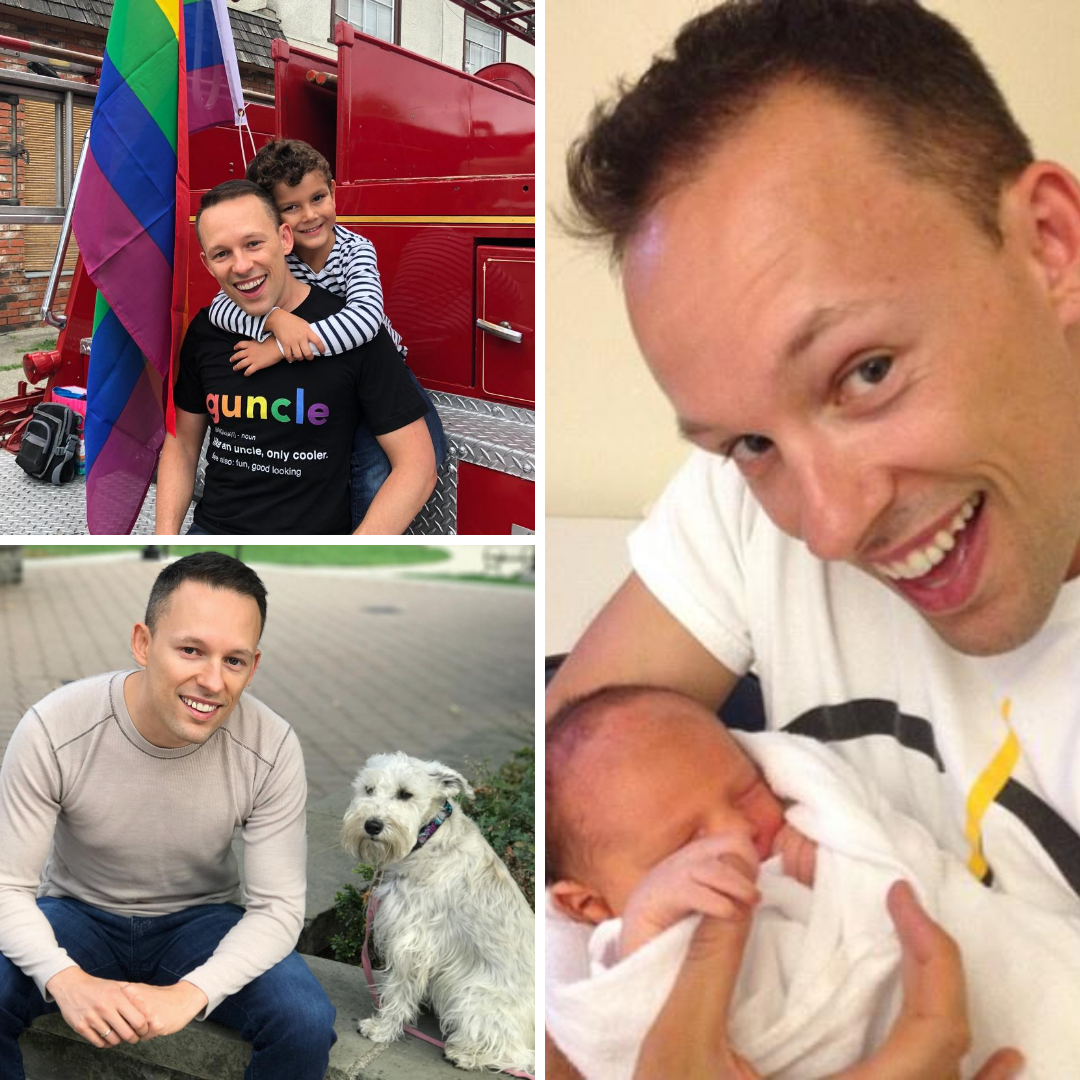 Josh Rimer, 43, has been celebrating Guncles Day since it began! The Vancouver, B.C., local started by honoring the day at a trampoline park and then a swimming pool (captured here in this fun video) and has always made a fun day of it since.
"I’ve been around all his life and we’ve had a special connection right from the start. I have a picture of his hand wrapped around my thumb when he was one day old."
His honorary nephew is his best friend's son but they are like family. "He likes to tell friends and random strangers about his Guncle, which is so cool that he just uses the term as if everyone should know what it is and want to have one."

While having Dylan in his life is hugely important and life-affirming, Josh doesn't see himself as a full-time parent. "Never say never, but I’m very happy with just being a guncle at this point!" 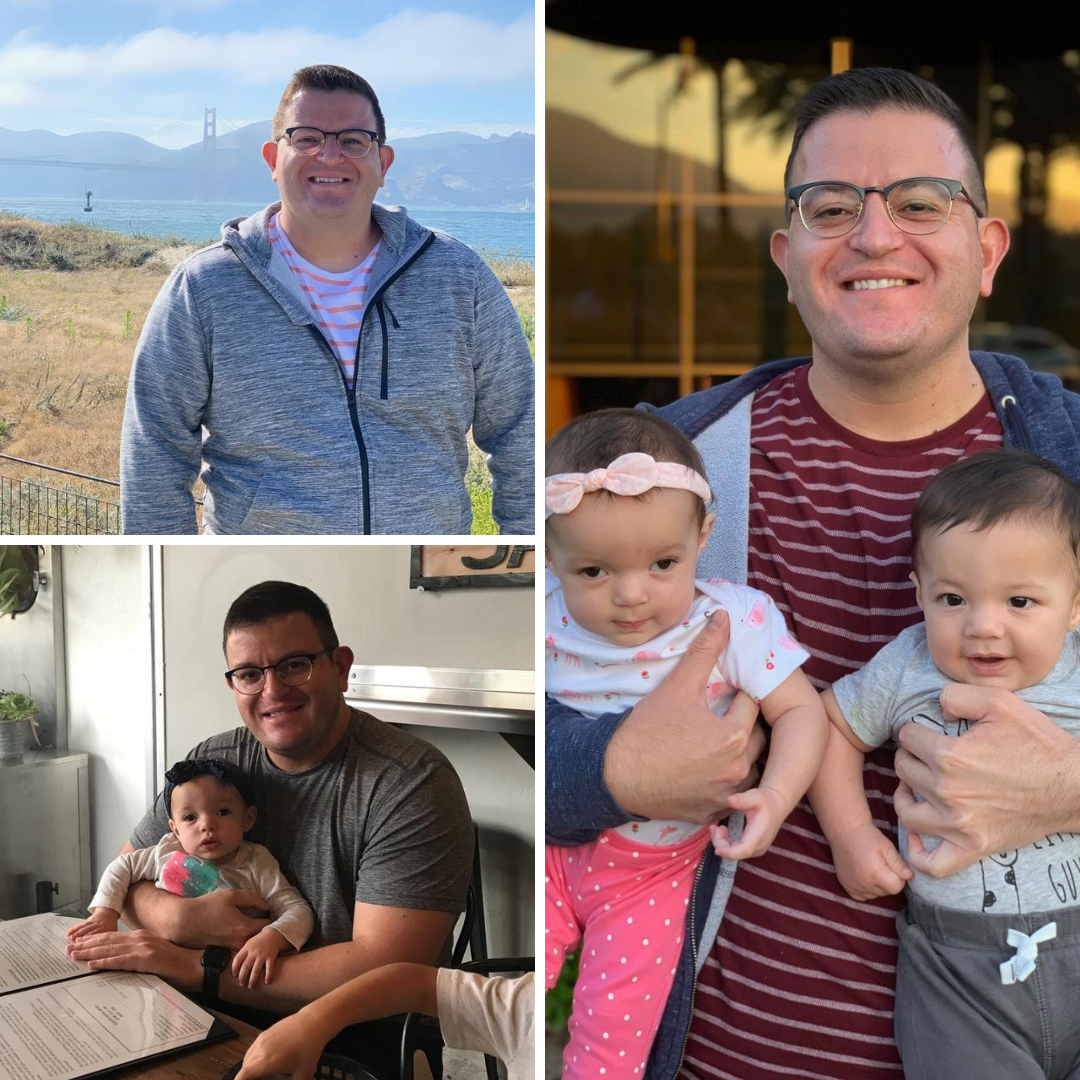 Daniel, 35, lives in Ontario, California and is a doting gay uncle to his niece and nephew. This year, Daniel hopes to spend the day with them in honor of Guncles Day, doing their favorite things like swimming and taking them to the park.
"My favorite thing about being a Guncle is that I have someone to spoil with cute gifts, future trips to Disneyland or the movie theatre, and of course sugary foods!"
Despite working a lot, Daniel has a wonderful relationship with his brother's kids. "When I’m not there I try to FaceTime or call them to say hi and let them know Guncle Dan Dan loves them."
He also has the winning ticket - he's the uncle with the awesome pool they love to swim in! But aside from swimming, Daniel loves to read to his niece and nephew, play and "one of my faves is jumping on the bed!" Definitely a kid at heart!
Daniel was unsure of becoming a dad himself until his niece and nephew came along. "Something changed in me. My connection with them and their unconditional love makes me want to have my own kids one day."
*** 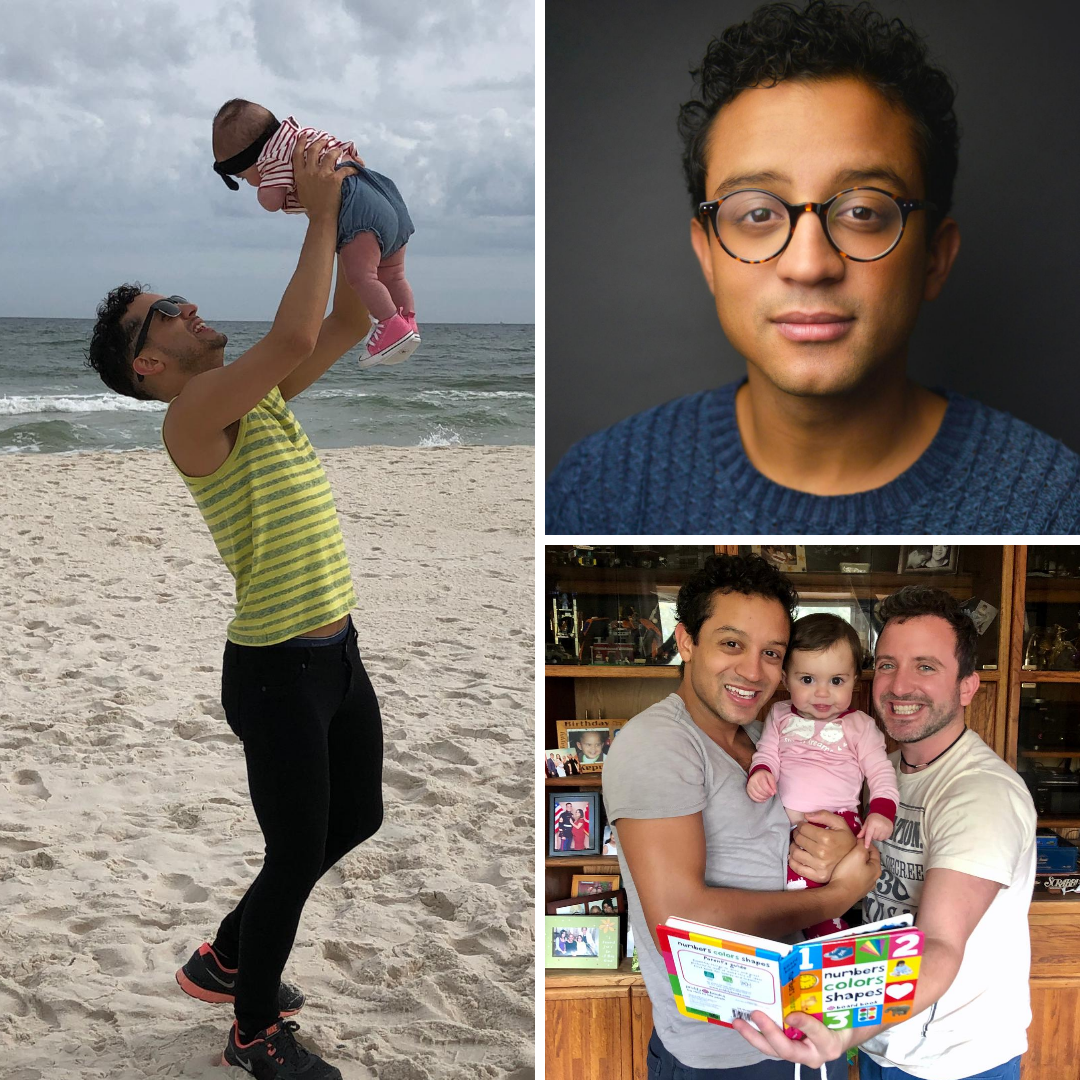 Zach Infante, 29, is so excited to celebrate their first Guncles Day this year! Their niece is a year and a half but they missed honoring it last year so here's the first of many!
"I love how it’s connected my sister and I. It’s made us closer and shown me how important being a guncle is to our whole family."
Zach's niece is an inspiring force in their life. "We don't live close to each other, or in the same time zone, but FaceTime has made a daily check in possible. The times we have spent together have taken some warming up hours, but once she gets used to me, she beams like a light."
One of Zach's highlight guncle moments was when they introduced their partner to Mia on a family vacation celebrating her first birthday, and there was an instant connection. "We also spend a bunch of FaceTime together where we pretend to feed each other through the screen and blow besitos."
"Parenthood is totally in the picture and I really see myself adopting a child. I used to think God made gay couples to take care of all the children without parents. Having kids remains an important part of my life journey."
*** 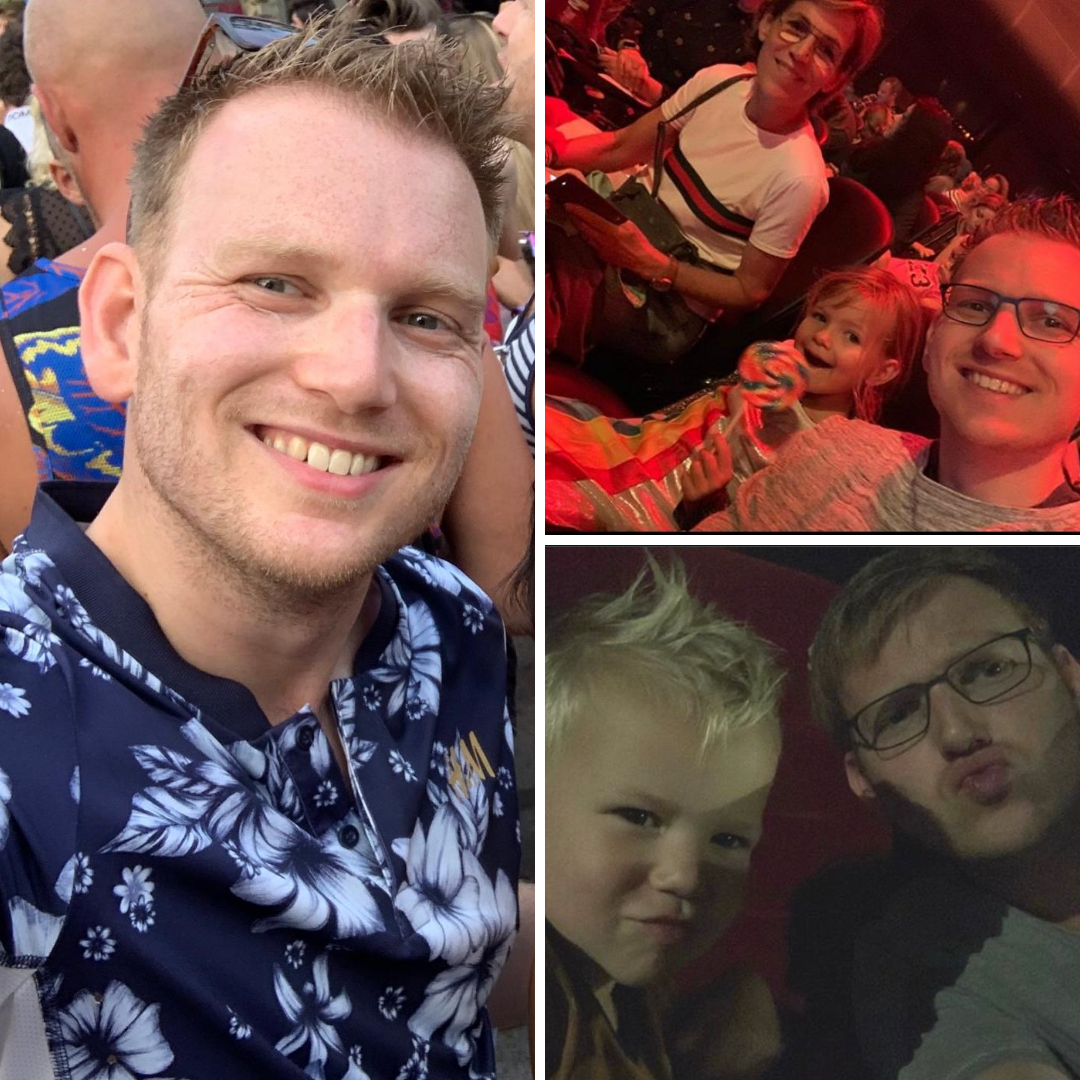 Mike, 31, lives in Utrecht in The Netherlands and is the proud gay uncle to one niece and one nephew.

Mike gets to see his niece and nephew fairly regularly and even more often during school holidays. "The beauty of the relationship is that I can always drop by. For a cup of coffee, a movie or a game of hide and seek. The other way around is true as well."

An an uncle, Mike also likes to do things with his nephew and niece separately, so 100% of the attention can be on just one of them. "My niece had her first pop concert with me. These are special things that you will not do with someone every day."

But it doesn't always have to be about an event or outing. It can be much simpler things that are even more important. "To see each other for a hug, a romp. I learned from my own uncle and aunt how much this will yield in the longer term. That way my sister and I can always knock on my uncle and aunt's door. Ultimately, I hope to pass this on to my niece and nephew."

Does Mike see his own kids in the future? "It is a dream. Hopefully it will come true." 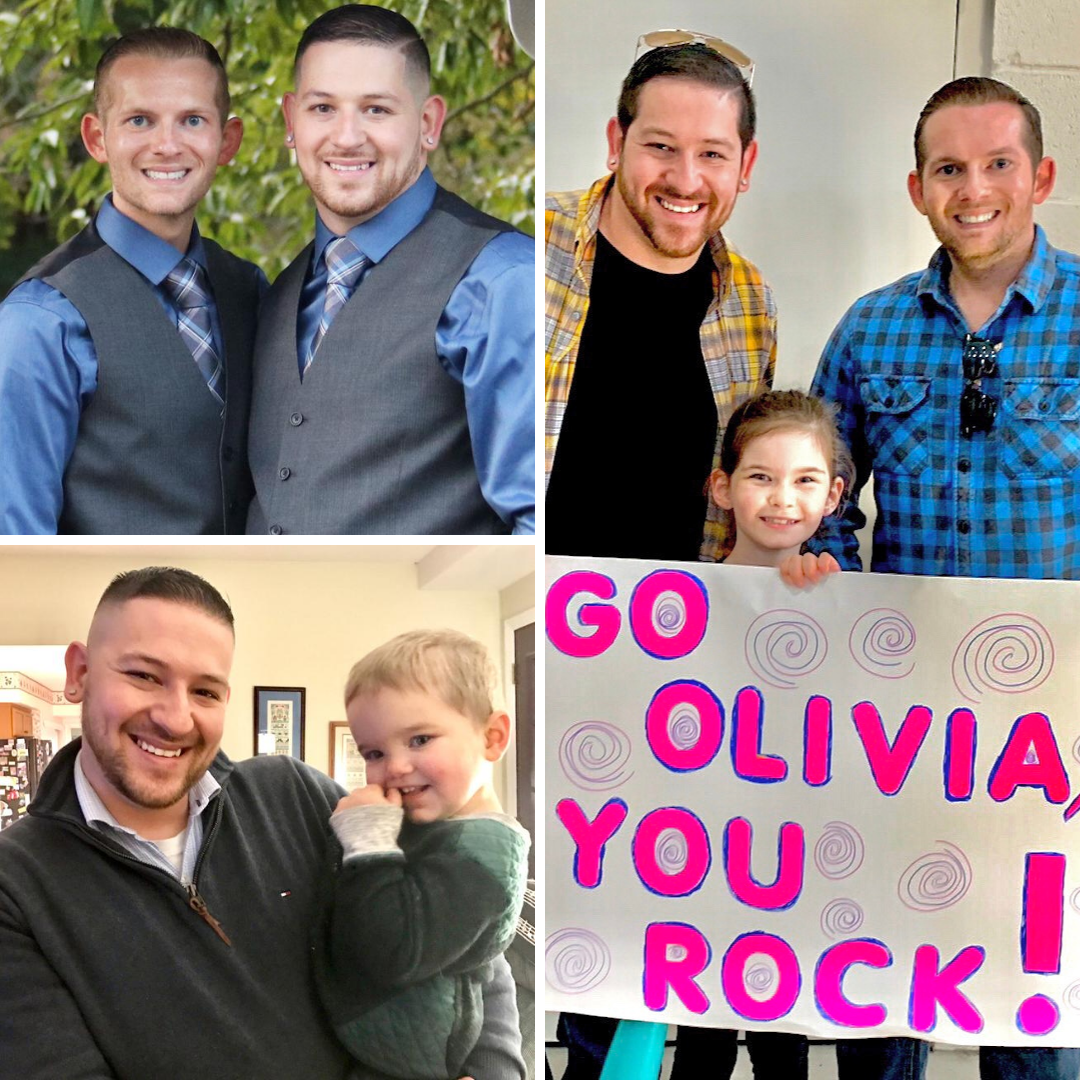 JT, 29, and Carlos Kaltreider, 30, are very close with their nieces and nephews and support them in everything they do. "It feels like Guncles Day every time we’re with our nieces and nephew!"
"Our favorite thing about being guncles is the unconditional love we get from our three nieces and one nephew, and seeing the excitement on their faces when we walk through the door to see them. It’s truly magical!"
The Philadelphia husbands live 90 minutes away from one the families, so they try to attend their sporting and music activities. "Last summer we drove from Pennsylvania to Disney World and back and it was such a great time to be with them and experience an amazing adventure."
Seeing their other two nieces is a little more challenging as their dad is in the military and they travel frequently, but they try to see them annually, still spoiling them on their birthdays and holidays.
JT and Carlos are looking forward to one day being dads as well as guncles. "We are waiting until JT is done receiving his Doctorate degree and we are exploring the best option for us for having children, whether adoption or foster care."
*** 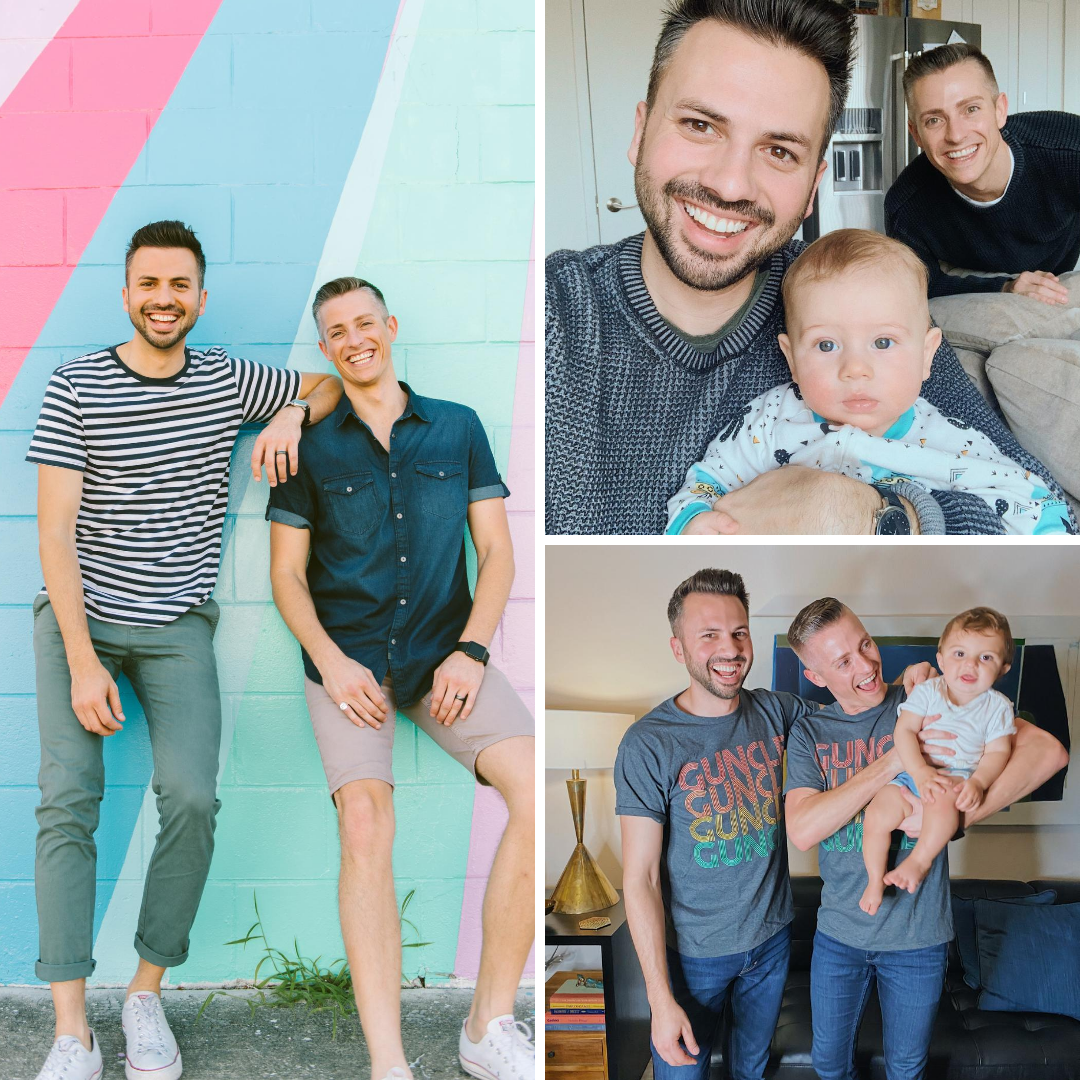 Nicholas Catania and Ryan Sullivan became gay uncles less than a year ago, and are celebrating Guncles Day for the first time this year. "We are so excited to now have a special day dedicated to our favorite nephew and adopted nephews!"
"Being guncles is the absolute best!" gushed Nicholas and Ryan. "Being a guncle is a special role made especially for us and the responsibility that comes along with it! We can't wait to be there to provide comfort and guidance in this uncertain world."
Due to COVID-19, the guncles have missed out on spending in-person time with some of their nephews. For the little ones who don't live close-by, like Ryan's godson Nash in upstate New York, thank goodness for video chat! "It has been hard to watch him grow from afar, but every time we see his smile it makes our day! He is growing up before our eyes, even if it is through a lens."
In Tampa, Florida, where the men live, they get to occasionally spend time with their good friend's son who gifted them their GUNCLE tees not too long ago. "We love them!"
Nicolas and Ryan both come from big families and have talked about one day expanding their family. "[We] are looking forward to sharing our journey sometime down the road. We know Nash would just LOVE a cousin!"

A 'Twinsies' Christmas — with The Marzoa Family

Thanksgiving Crafts for Dads and Kids

Fallin' for Our Families This Autumn

Vote For Your Favorite Halloween Family Costume of 2020!

It's Halloween, Witches! Check Out These Gay Dad Family Halloween...

Planning for the Holidays During COVID-19

The Gay Dad Kings of Halloween

If You've Got It, Haunt It: GWK's Annual Halloween Family Costume...

30 Killer Family Halloween Costumes Sure to Spook the Competition

How To Make Halloween At Home Fun For You And Your Family!

Happy Gay Uncles Day to All the Fabulous 'Guncles' Out There!

This Father's Day, Gay Dads Celebrate the Other Fathers in Their Lives