Inclusive Family Films Everybody Will Love at Movie Night

Stuck inside and struggling to entertain your family? Although there are so many great movies out there, most lack diversity and representation. But you already knew that. We all want our kids to watch something and relate to it, whether it’s feeling like a superhero or just seeing a family like theirs. 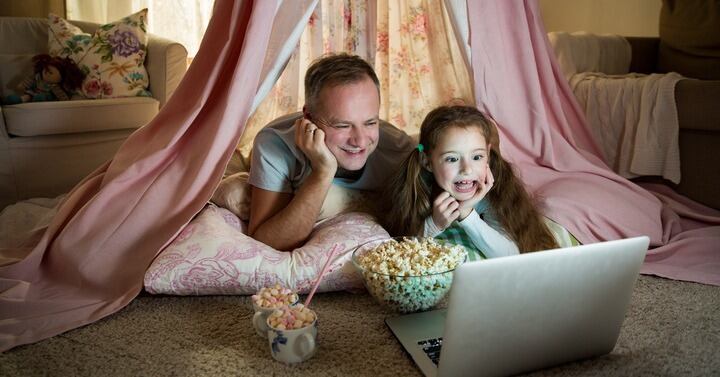 You can't downplay the importance of representation. They need to see storylines that reflect their experiences and challenge their perceptions of the world. Here are some family films that keep everyone happy at movie night.

Pixar’s latest short, 'Out', is now streaming on Disney+. It tells the story of a grown man coming out to his parents as he’s about to move in with his partner. Although it probably isn't the length of a full feature film fit for movie night, it’s definitely worth a watch.

This quirky and surprisingly emotional nine-minute rollercoaster comes from writer/director Steven Clay Hunter, who struggled with his own battles when coming out. It illustrates that Disney+ content can be both family-friendly and deal with serious issues. It’s also a historic moment because it gives animation studio Pixar its first-ever gay protagonist.

It’s a bit of a wild concept where the lead has his mind magically swapped with his dog's. We don’t want to spoil it, but it has a happy ending, we promise, which is something many LQBTQ+ films don’t have.

'Bend It Like Beckham' is mostly about the familial generation gap. More suited to tweens, the protagonist’s desire to play soccer against her traditional Sikh parents’ wishes unfolds alongside the story of her male best friend coming out.

The movie treats both conflicts with the same weight and validity. Not only is it great for soccer-obsessed little ones, but it also goes against stereotypical gender norms. It showcases you can do anything you want, regardless of who you are or where you come from.

This heartfelt coming-of-age movie captures both the humor and difficulty of being a gay teenager. This is a film about falling in love, but to do so, you must fall in love with all of yourself first, which is more important than ever in today’s Instagram-obsessed world.

What’s so sentimental about this movie is the moment Simon shares being gay with his parents, who choose to love their son irrevocably.

A funny little movie; this is the story of a closeted retired hockey player who suddenly becomes the guardian of his nephew. This film tackles the challenges of keeping your true self a secret to the world, the fear involved and ultimately learning to love yourself so much that none of it matters.

It was seen to be the first time a professional sports league and team - the NHL and the Toronto Maple Leafs - allowed their names to be used in a film centered around homosexuality. A massive move that triumphs stereotypes and toxic masculinity too.

Not to be taken too seriously, it sees Tanner outed by the popular girls who decide to unleash a plot to find a gay best friend (GBF) to improve their chances of winning the prom queen crown. Although the plot seems to be a little outdated, it deals with the topic tastefully and doesn’t rely on cheap stereotypes.

Through the chaos and misguided steps, the teens soon realize true friends accept all parts of each other. It’s a fun movie and is worth a few laughs here and there.

All In My Family

For those with kids a little older, one of the best LGBTQ+ movies on Netflix is a documentary telling the story of a gay filmmaker who was raised by traditional Chinese parents. While he has come out to his immediate family, he records the journey back to China with his young children.

It’s a very real look at a man opening up in the most conservative of cultures to be embraced by his family. We recently considered a family feature story that tackles the same cultural barriers.

This isn’t to say family films you watch have to be inclusive as sometimes you might just want to watch 101 Dalmatians and enjoy it for what it is. In recent years, Pixar, DreamWorks and Disney have taken some tentative steps forward when it comes to bringing what was previously represented through subliminals in the foreground and narrative.

While there's been much debate over whether Elsa, the feisty ice queen in Disney's Frozen, is a lesbian, there’s a confirmed scene in the film showing the burly shopkeeper of Oaken's Trading Post has a husband and kids. This is pretty progressive for Disney but by no means radical.

For us dads, these types of movies are long overdue. Although the kids are probably bedazzled by a flash musical number, forgetting the entire plot, it’s still important that make sure these gay, bi and trans-friendly movies are accessible.

Do you have any great movie suggestions that tackle difficult subjects and represent families like ours? We’d love to hear from you; we’ve got some popcorn ready.

Actor Jonathan Bennett Opens Up About Being Bullied At School For...

U.S. Cities You Might Not Know Are Hubs For Same-Sex Households

Anderson Cooper And His Son Celebrate Books In The Cutest Way

10 Trailblazing Gay Dads Who Inspired Me

'The Real Dads of New York' Take Over GWK's Instagram — and Magic...

Drag Out the Holly: A Holiday Drag Extravaganza

Family Entertainment: Fun Things to Do to Keep Your Family Happy

Inclusive Family Films Everybody Will Love at Movie Night

Two Dads and Their Sweet Daughter on a Disney Reality Show