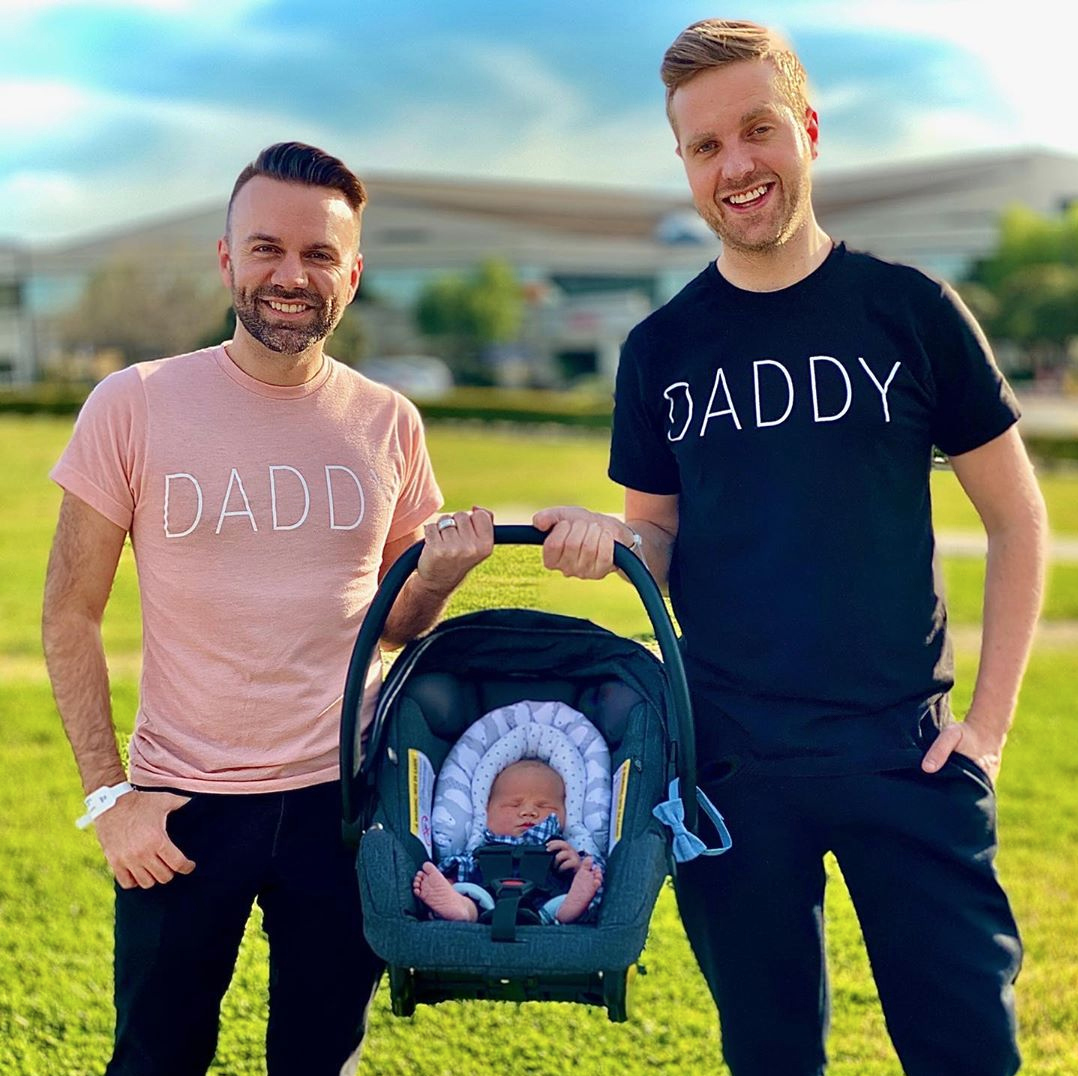 'An Amazing Journey': Congrats to Gay Dads on Their Recent Births and Adoption

Wishing all of these gay dads congratulations on their exciting news! From becoming first-time dads to finalizing adoptions, congrats to those in our community celebrating.

Congrats to Erik and Douglas on the birth of their son, Shane!

Erik and Dougalas recently welcomed their third child to their family through adoption! Erik's husband is a physician, so the prospect of expecting a new baby, while continuing to raise two children, all amid a global pandemic was jarring, the dads said. "Just as I started to feel hopeless, our phone rang," Erik told us. "My mouth dropped to the floor. Our birth mother was in labor!" Read more about the couple's adoption journey in Erik's recent essay, "A Gay Dad's Adoption Journey Amid a Global Crisis."A Gay Dad's Adoption Journey Amid a Global Crisis."

Congrats to Thomas and Jamie on the birth of their daughter! 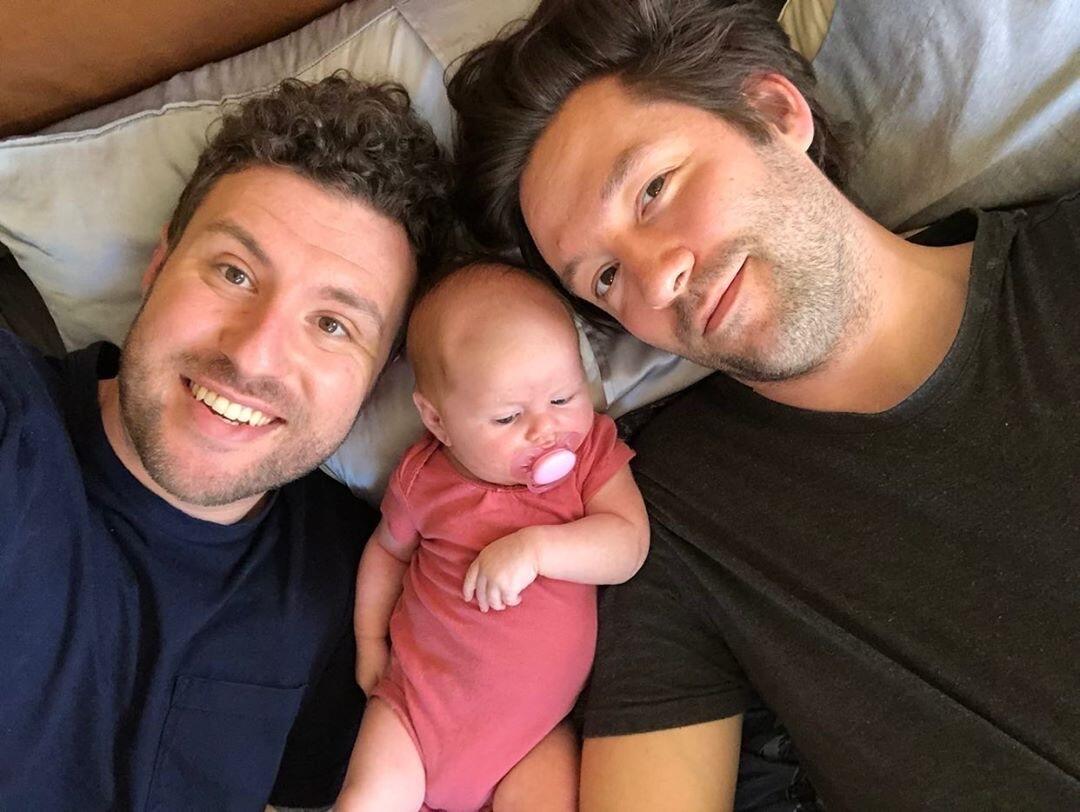 Thomas Boulding and Jamie recently became dads to daughter, Echo, through surrogacy! Jamie's Aunt, Sheila, was kind enough to help fund their surrogacy journey, and has been an incredibly active part of his life since his mother died unexpectedly. "I wish I could share the joys of having a multigenerational family," Jaime told us. "It's not always easy but it's so rewarding."

Congrats to Jordan and Christopher on birth of son, Noah! 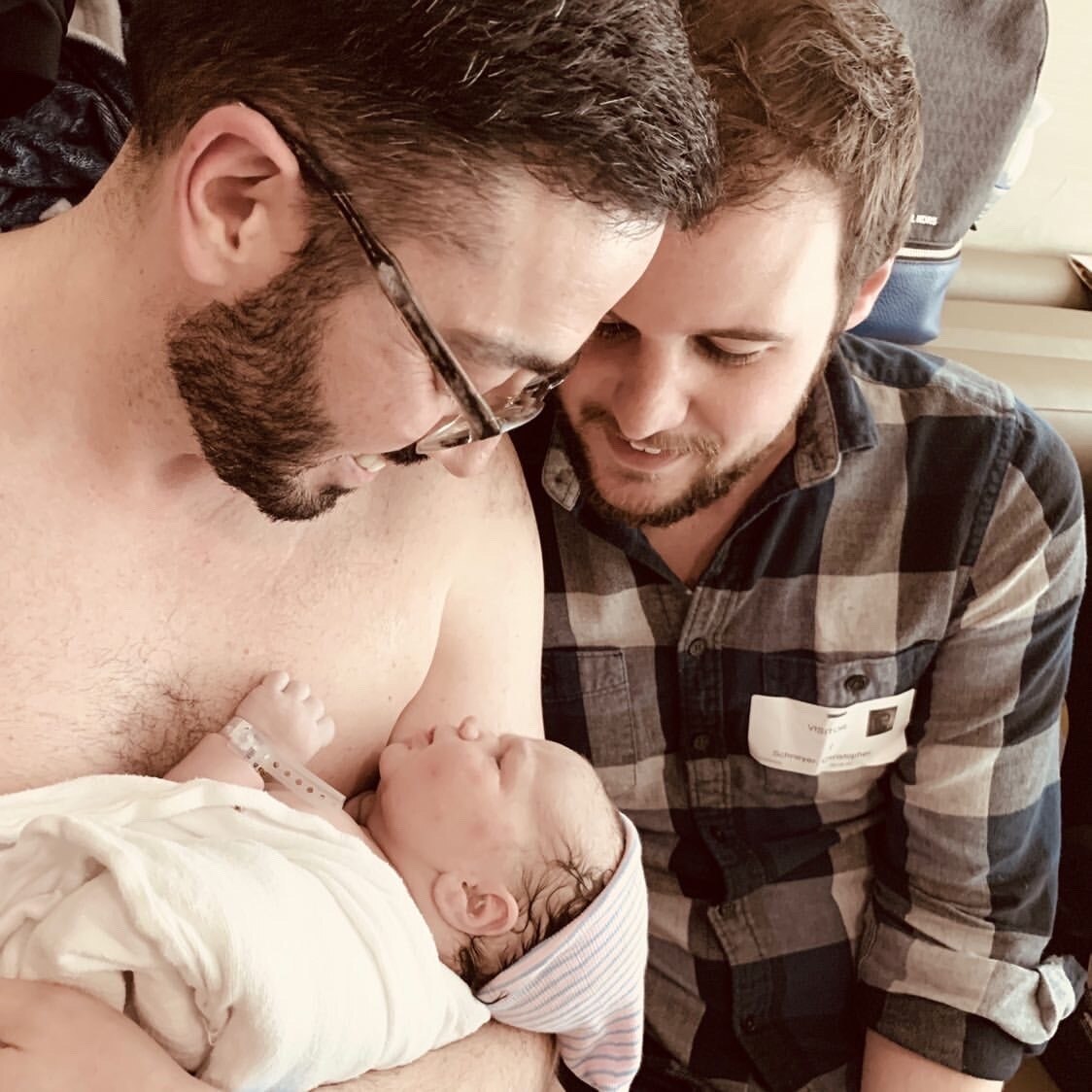 Jordan Schneyer and Christopher recently became dads through surrogacy! "Becoming a dad during a stay-at-home order is definitely interesting," the dads told us. "Beyond the normal hospital fight of who has legal rights in the delivery room and nursery, we were under strict hospital policies on visitors." Thankfully, the couple were able to get an exception made that allowed for both of us to be in the delivery room.

Congrats to Josh and Adam on the finalization of their adoption! 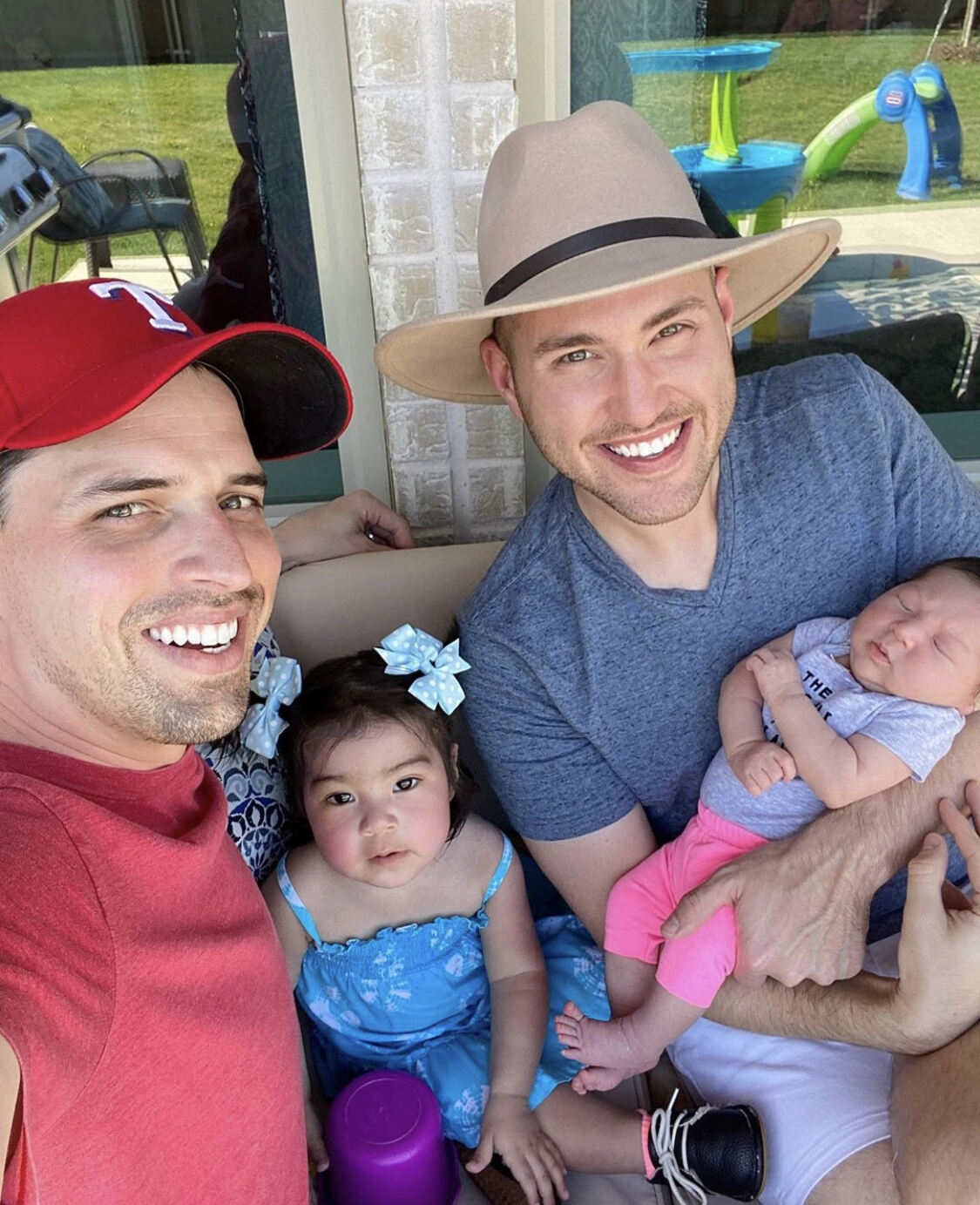 Josh Klocke and Adam recently became dads through adoption! "We chose newborn adoption because we have always wanted to grow our family and adoption gave us the best opportunity," the dads told us. Fatherhood, they said, has been an "amazing journey" so far. "While it has been tiring, every day brings a new adventure," they said. "The feeling of holding our daughter for the first time was indescribable."

Congrats to Heath and Carlos on the birth of their son! 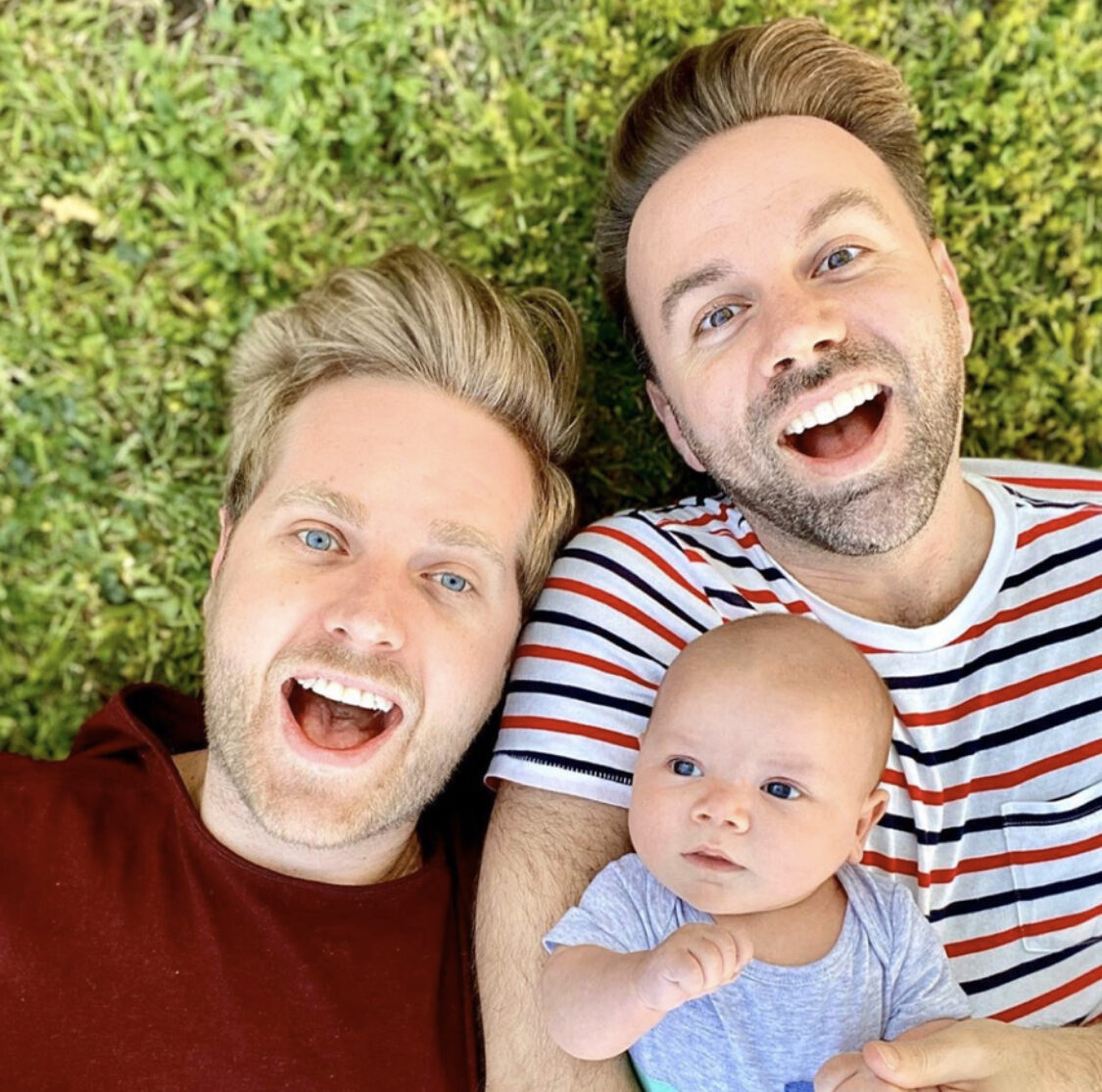 Heath Tucker and Carlos Avilas recently became dads through surrogacy. "We flew out to Los Angeles about three weeks before our due date thinking that would be plenty of time,: they told us. As soon as the couple landed at LAX airport, they said, they turned their phones, and messages from their surrogate and her husband started flowing in, one after the other. "We literally raced straight from the airport to the hospital and made it just in time to be a part of the entire birth."

A very special congratulations to Gays With Kids’ favorite mom, Rosalind, who’s been a key member of the GWK team since our launch!

Rosalind and Rocky are incredibly thankful to and in awe of the medical and hospital staff that helped deliver their second child, Walter, so calmly amidst this chaos. Some of that calm must’ve rubbed off on Walt as he’s a very chill baby, says Rosalind, and seems amused or unperturbed by his older sister’s big personality as the family, like others, quarantine at home.

"Instant Love": Congrats to These Gay Dads on Recent Births and...

"Forever Changed": Congrats to These Gay Dads on Recent Births and...

'An Amazing Journey': Congrats to Gay Dads on Their Recent Births and...

"Worth Every Blood, Sweat, and Tear": Congrats to Gay Dads on Recent...

"Our Family Is Complete": Gay Men Celebrate Recent Adoptions and...

'Our Family is Complete': Congrats to Gay Dads on Their Recent Births...

"Under Their Spell": Congrats to all the Gay Dads Whose Families Grew...

"Over the Moon": Congrats to Gay Dads on May Births and Adoptions!

"This Is Home": Congrats to Gay Men Celebrating Births and Adoptions...

"Intoxicating and Unforgettable"; Congrats to Gay Dads Whose Families...

"A New Level of Love": Congrats to Gay Men Whose Families Grew in...