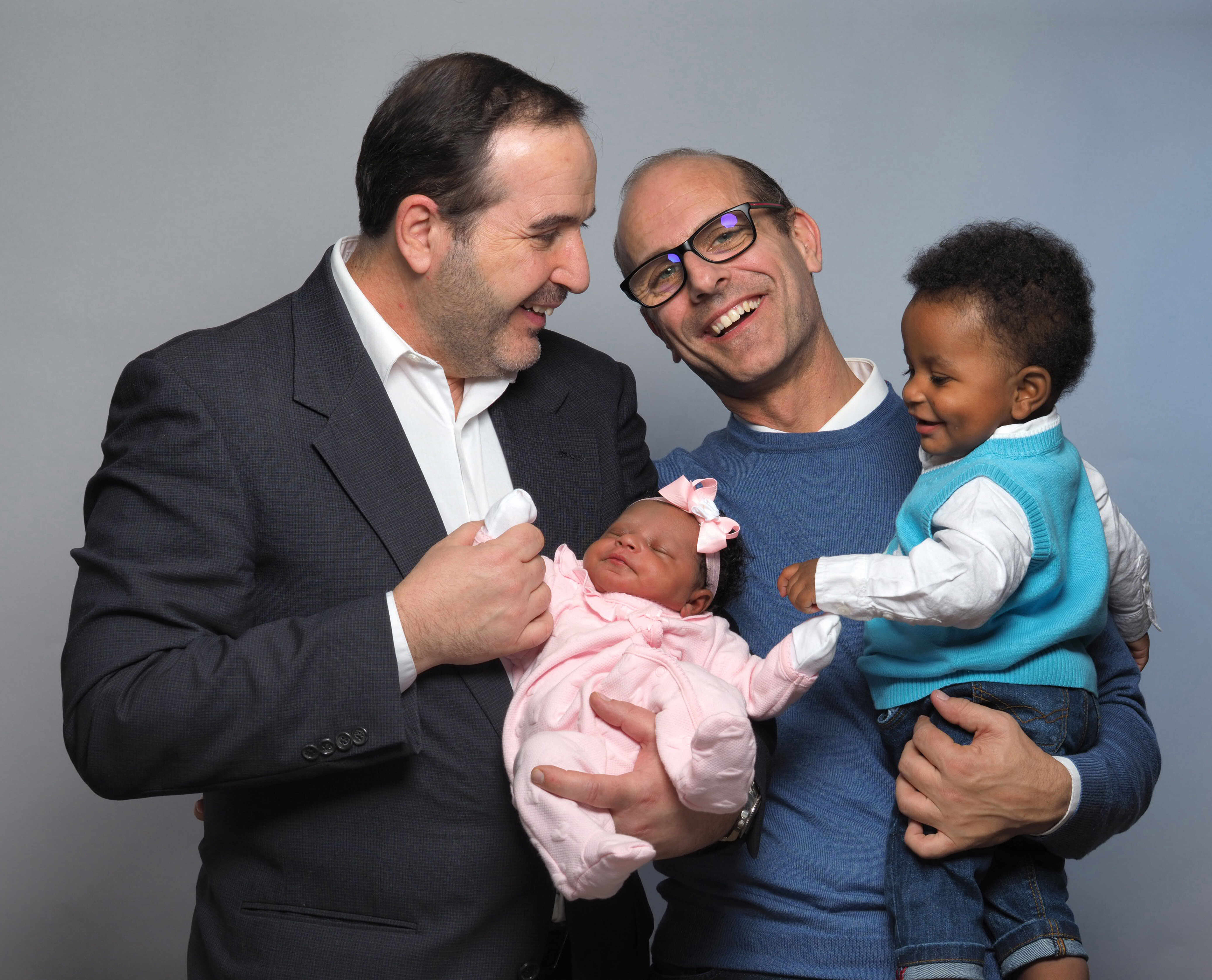 "Two Dads Under the Christmas Tree"

Hi, we are Stefano and Claudio, two Italians dads of two handsome siblings, Jayden and Maria.

Together with the True Colors Lab Publishing, we are thrilled to announce the launch of a book dedicated to our adoption story.

The crowdfunding campaign to support the creation of Two Dads Under the Christmas Tree, and to make possible its translation into different languages, has been launched by True Colors Lab Publishing on Kickstarter last June 21st. Surprisingly, the project has been completely funded in 72 hours!

Currently, the book is into production and will be released next October, but it's already possible to pre-order it on Amazon and on the publisher's website www.truecolorslab.com.

Here's a bit more about our story: Our children are the most beautiful thing in our lives and the source of our daily happiness. On December 18th, 2017, after more than two years of bureaucracy, documents, and exhausting waiting, we found ourselves once again in front of an adoption agency's operator and for the umpteenth time, we were left disconsolate. Unexpectedly, at the end of our meeting, she told us that there was indeed a possibility of adopting a child who would be born in a week. With a "but". He was a black child.

And she said it, almost apologizing for the proposal she was about to speak out, probably in her mind an "indecent" proposal to make to white people. We were overwhelmed by the surprise, the hope, the immense joy for the news, and the amazement for her attitude. She explained to us that in the list of preferences that the adoptive parents fill out when they apply, blonde girls are on the top list while black children on the bottom.

Oh my goodness! Not on our list! Six days after the meeting and after the biological mother's consent, Jayden came into the world chancing our lives forever. Forever at the top of every list we can imagine!

Then his little sister Maria came, and now they are - no question - the owners of our hearts and our thoughts.

This book is nothing more than the summary of the first year of our life together and came out from the pen of Tobias Mile. Our story was a spark for his imagination and our experience as parents a wind that fuelled the fire of his sensitivity. Then, Tobias shaped it. A delicious, ironic, funny, and touching form, to communicate to everyone what the words Family and Love can mean beyond any stereotype.

Two Dads Under the Christmas Tree is not just a children's book, a tool to make them learn to respect the others and what is different from themselves. It's a book for everyone. For all ages. It is, above all, a book for all open-minded people who want to share with others and teach their children that Love has no sex, color, nor limits.

We are so thankful and honored that Tobias Mile wanted to create this original book around our family with the intention of raising awareness of adoption and inclusiveness. Tobias is the nicest soul in the world and he also wanted to personally send a comment on how the idea was born in his mind and how we got to know each other. Enjoy it and we hope you will enjoy the book as well! Thank you very much! 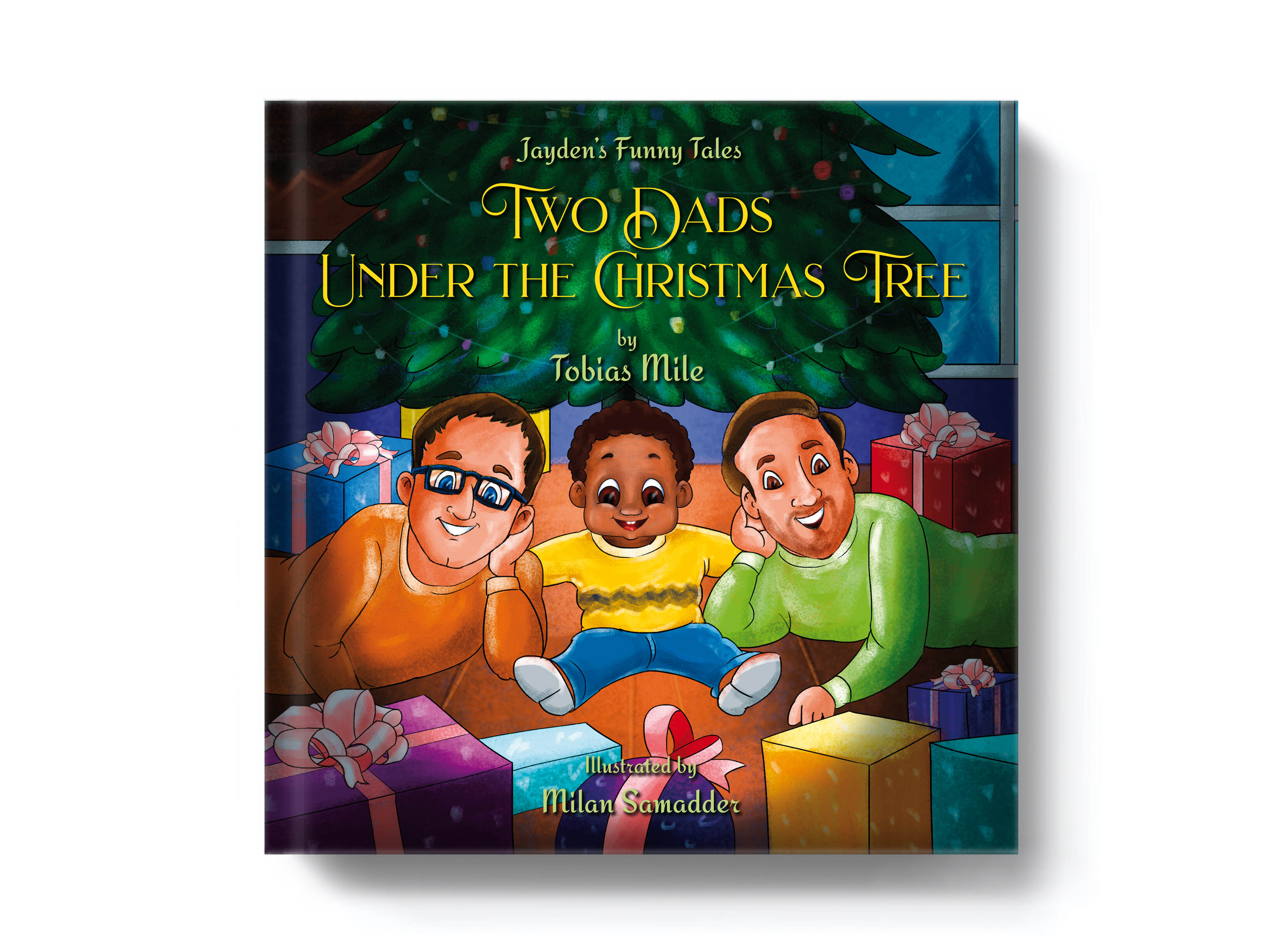 "In the summer of 2018, during a business trip to Venice, Italy, I was looking for a new idea for my next book. I was lucky enough to meet this beautiful family, two Italians Dads and their African-American adoptive son, Jayden. After learning their story, I decided that I would create something special around that adorable baby, who has remained in my heart ever since.

"Two Dads Under The Christmas Tree" is not only the story of a child’s first year of life, but it is an Adoption story. The story of an act of Love, because this is what the word Adoption means, in whatever way you want to read it.

In the mysterious and complex movement of the Universe, an unknown mechanism is triggered at some point and ensures that the roads of several people will meet to change the life of each of them.

Somewhere in the world, there is an orphaned child. Or a couple of parents, or maybe even just a mom, or just a dad, who can’t, or don’t feel ready, or don’t want to take care of this baby for some reason. Human beings who, generously, decide to entrust him to someone who will be able to do that in their place.

In another part of the world, a mom and a dad, or maybe just a mom, or maybe two moms, or even two dads, have always been waiting for that child, with open arms, with an open heart, with a sole intent: to give him their Love.

This is Adoption, with a capital A.
It doesn’t matter where, or how, or what color or gender all these people are. The only thing that matters is that they will be a family. They will live for each other and their lives will remain linked, inextricably, forever.

And this is Love, with a capital L.”

"Two Dads Under the Christmas Tree"

Determined To Be Dad: A Journey of Faith, Resilience, and Love

Behind 'A Family of Their Own': The Personal Beginnings of My First...

But... Doesn't Everyone Need a Mom?

Behind 'A Family of Their Own': The Personal Beginnings of My First...

New LGBTQ Children's Book Is About Two Moms — but Isn't About Being...

This LGBTQ Children's Book Is About "Everyday Adventures"

"Fridays with Fitz": A New Kid's Book Based Upon the Son of These Two...

Sick of Switching Genders on Their Daughter's Kids Books, These Moms...