Jaysen and Chad met in 2003 on an Internet dating site. They both knew from the very beginning that they wanted a family, so soon they began their journey and started saving for adoption to start a family in Charlotte, North Carolina. 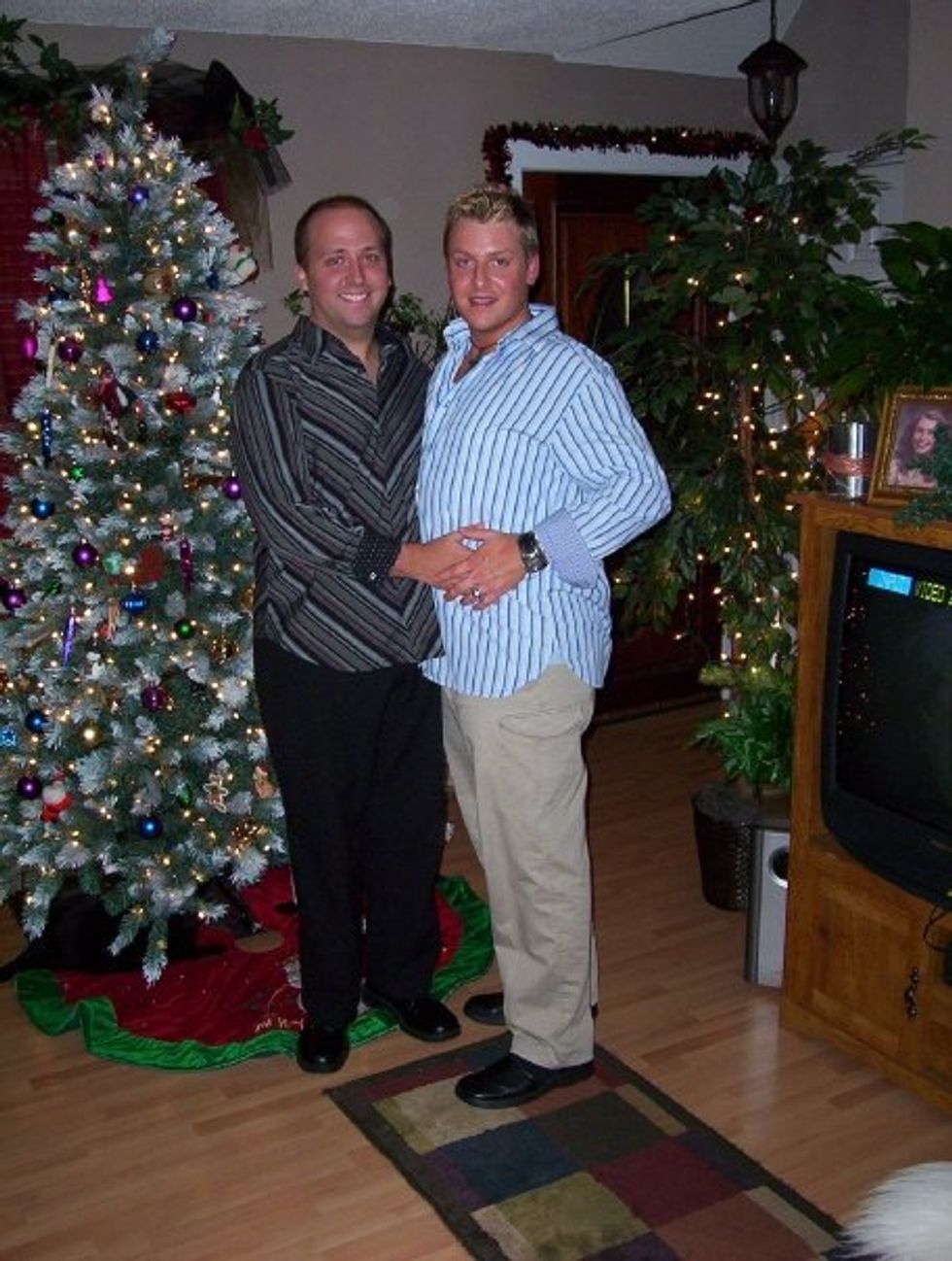 Christmas 2004: the first picture of Chad and Jaysen in their new home

Jaysen is a hair salon owner and a stylist, and Chad is a private school teacher, and they worked part-time jobs on top of their regular jobs in order to save. Although they remember the time fondly, they also recall just how hard they worked in order for their dreams to come true. 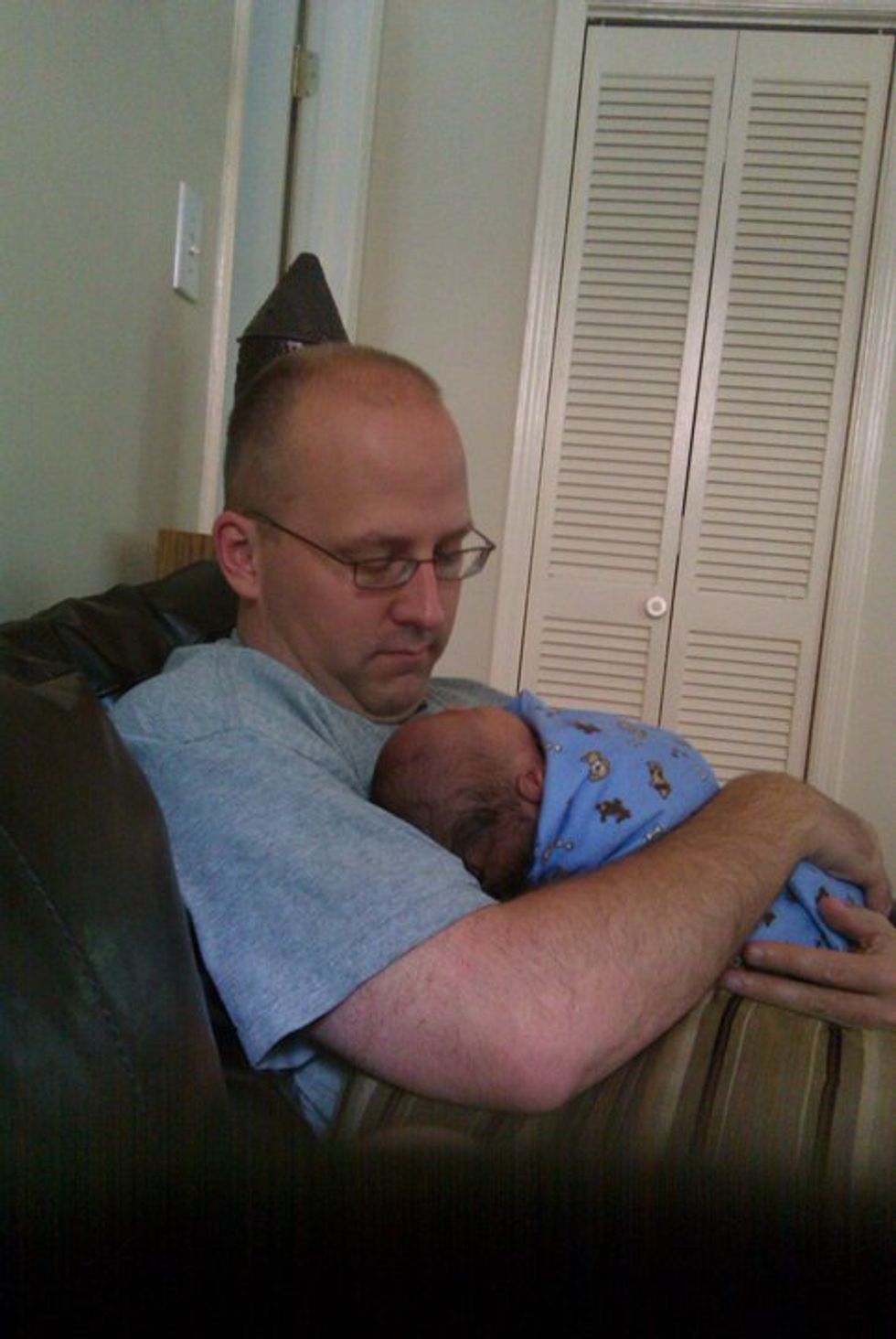 June 2010: Daddy Chad and little Hudson on his first day in his new home.

Once they had saved enough for their open adoption, they didn't have to wait long to be matched to a birth mother. Just two weeks before the baby was born they received “the phone call," informing them that a birth mother wanted to meet them. Needless to say, they dropped everything to go to meet her. Jaysen remembers that time as “the most thrilling and scary moment of our lives." 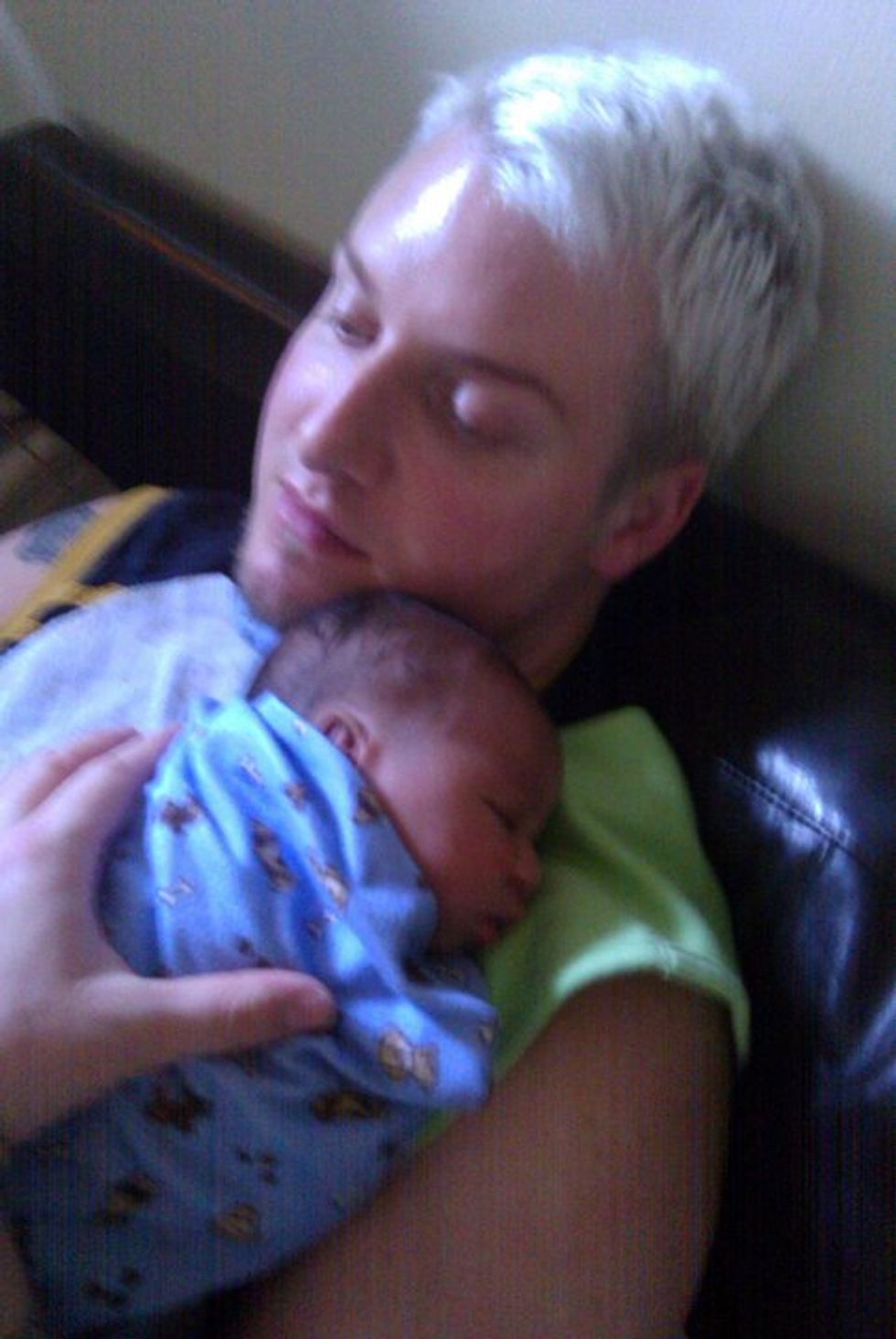 On June 10, 2010, baby Hudson was born and Chad and Jaysen's lives changed forever! Unfortunately, when Chad’s teaching contract was not renewed, the family suffered financial hardships and had to leave their house. 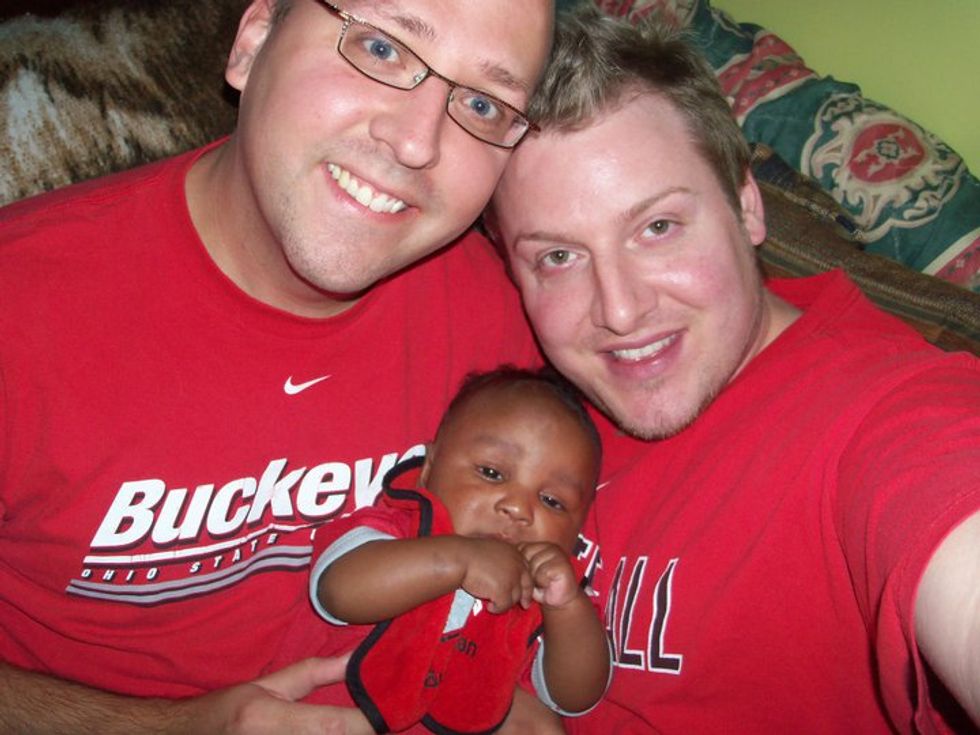 First ever family picture together at home, 2010 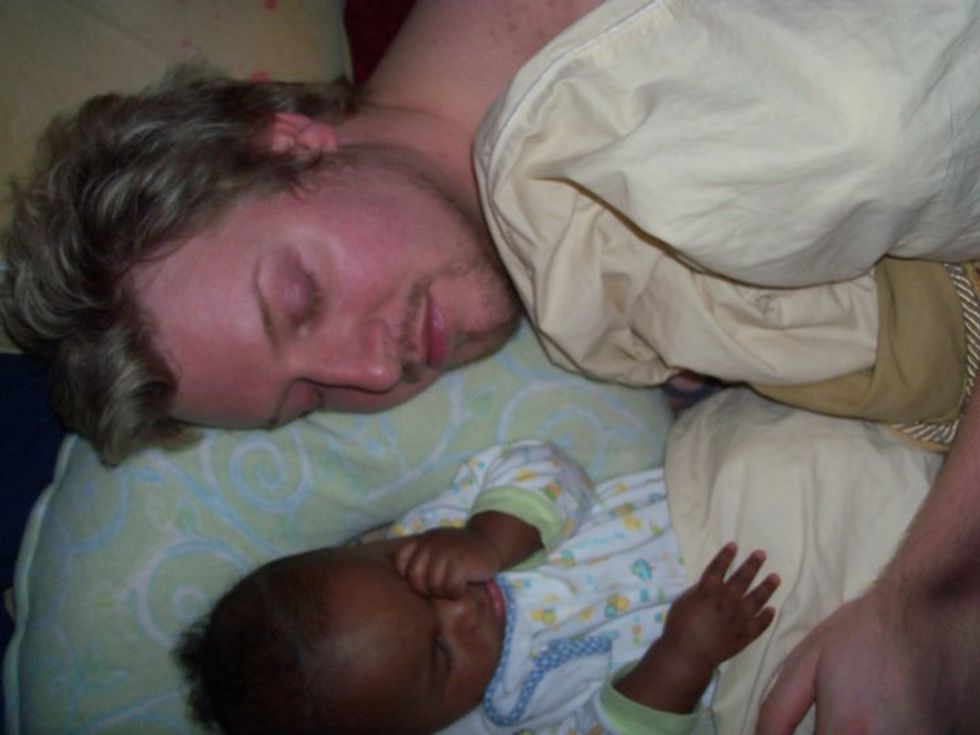 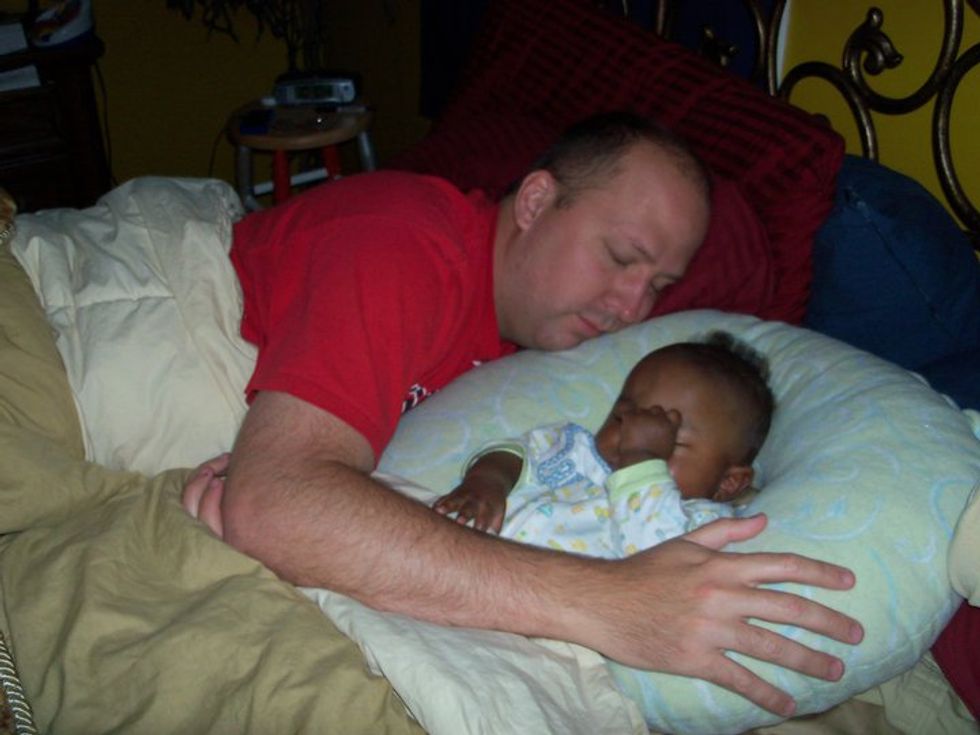 Hudson sleeping next to Daddy Chad

On Thanksgiving, 2010, Hudson's adoption was finalized and they officially became a family. 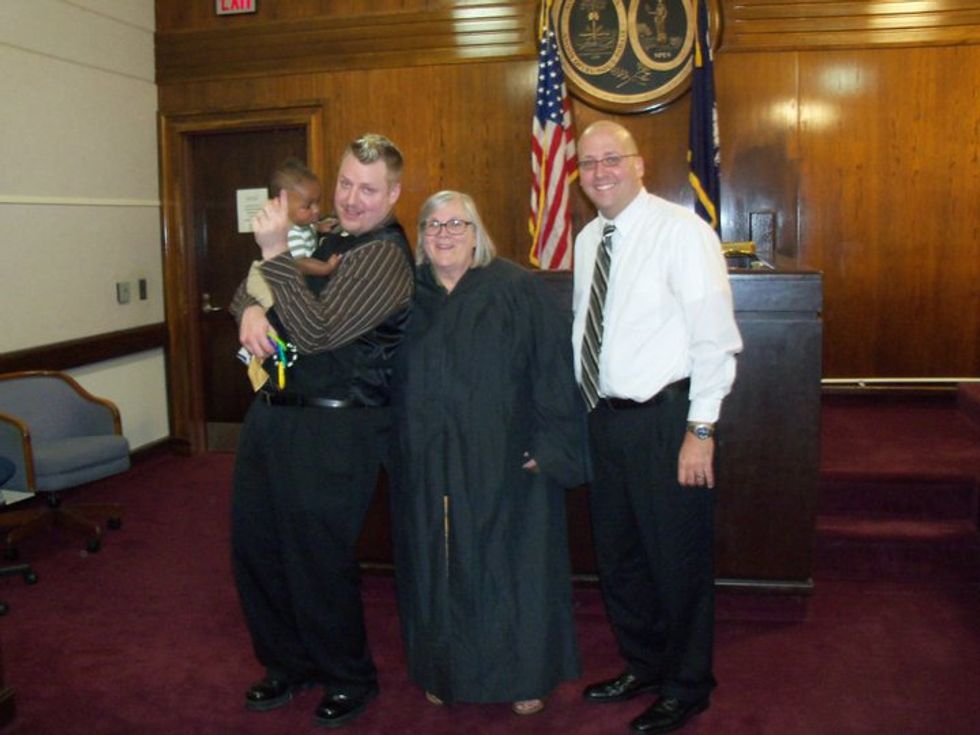 Adoption photo with the judge 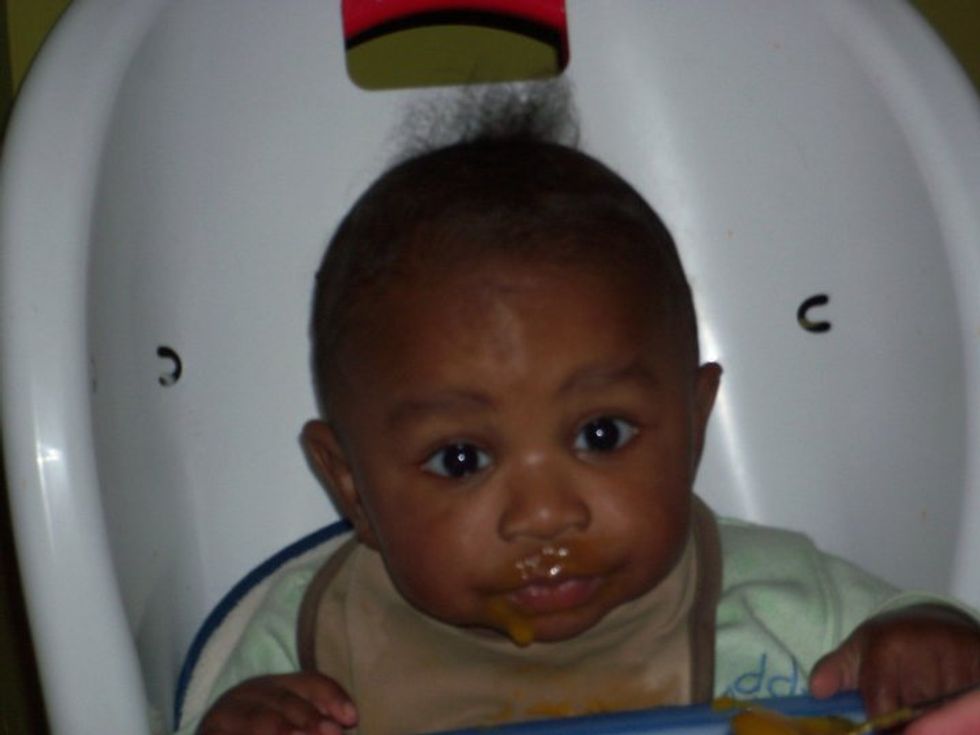 Hudson celebrates whilst munching on his first Thanksgiving meal

It’s a family tradition for this two-dad family to pick three pumpkins for the Halloween season. 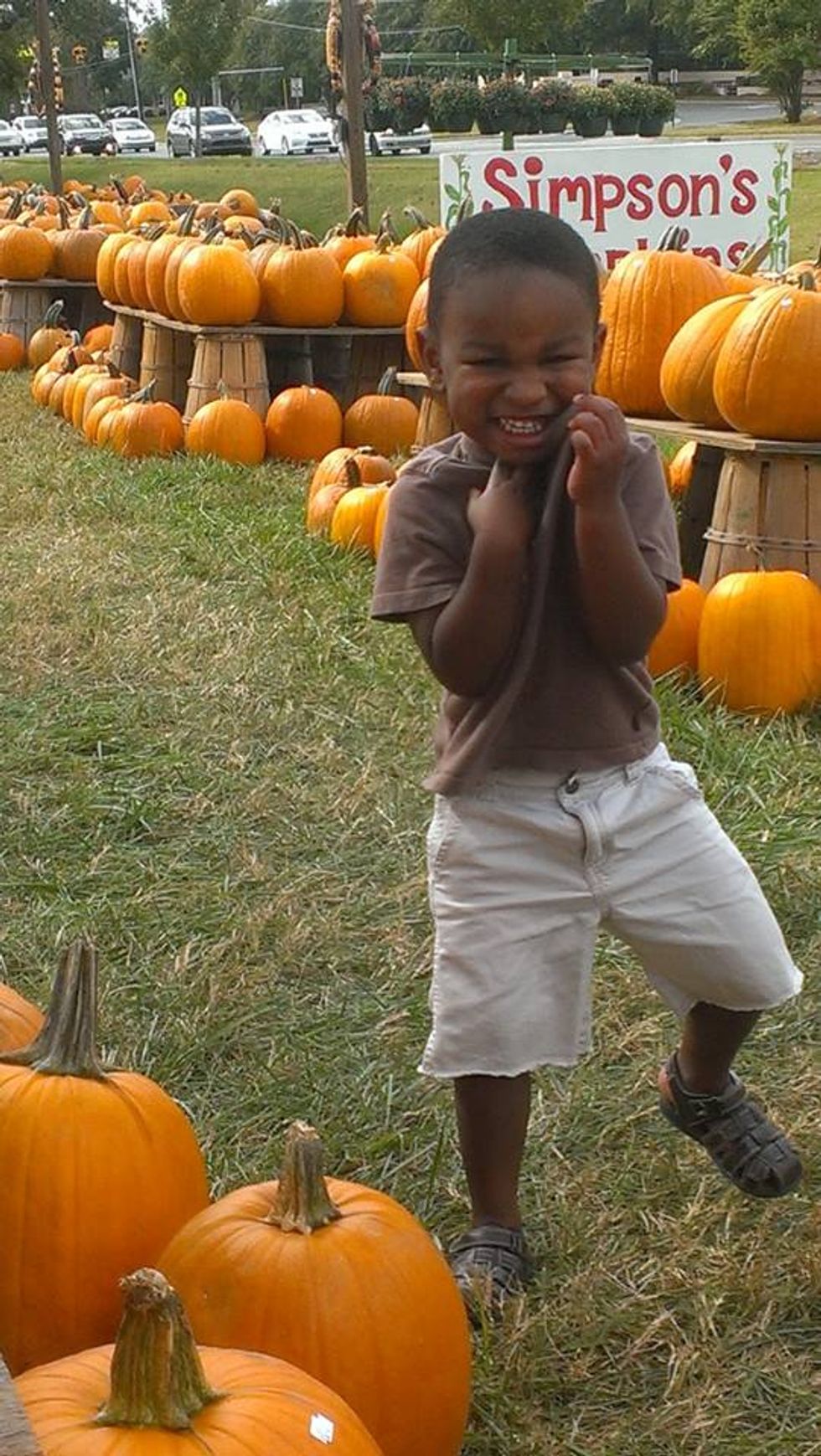 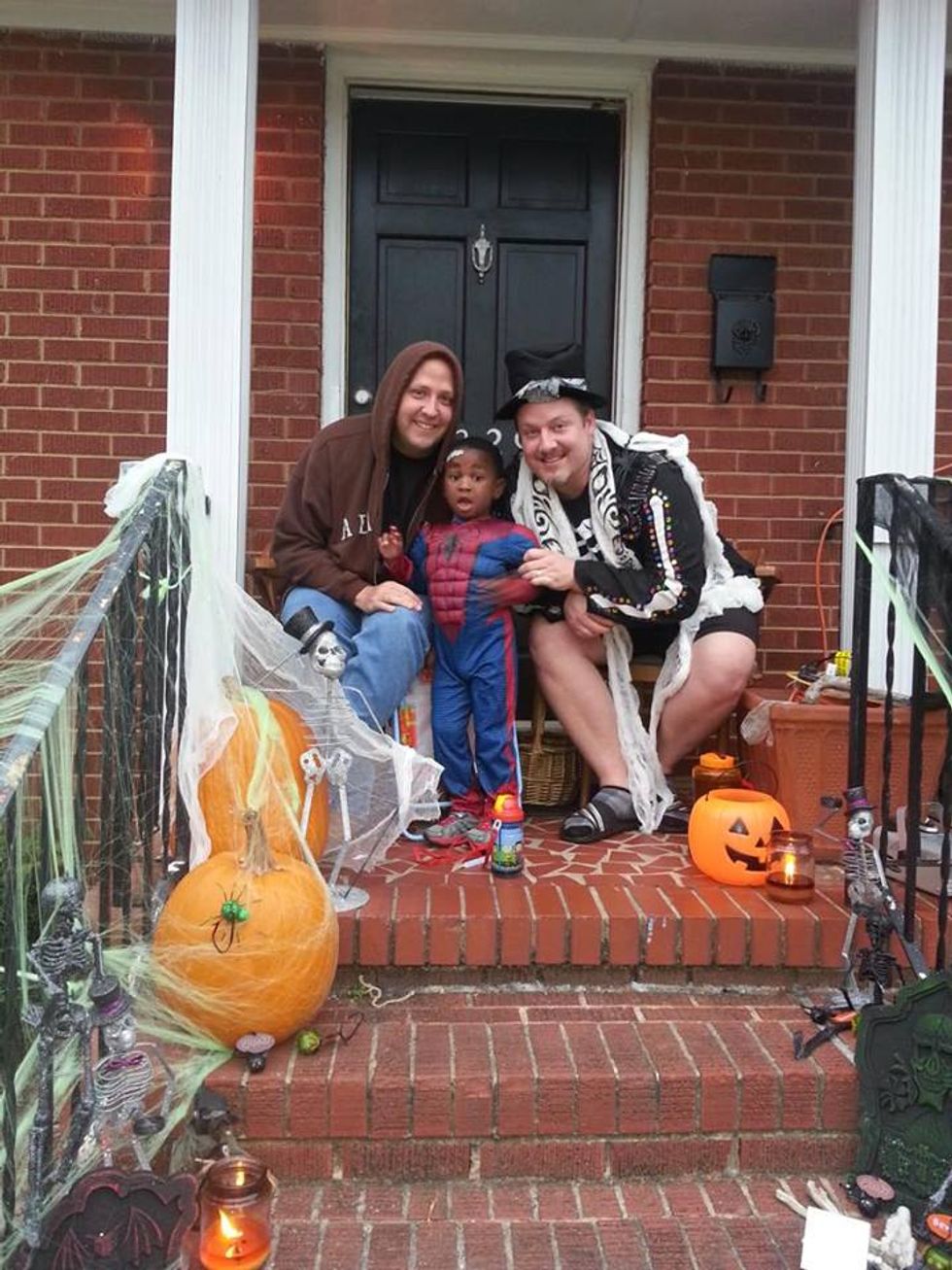 Halloween 2013: This family loves to dress up 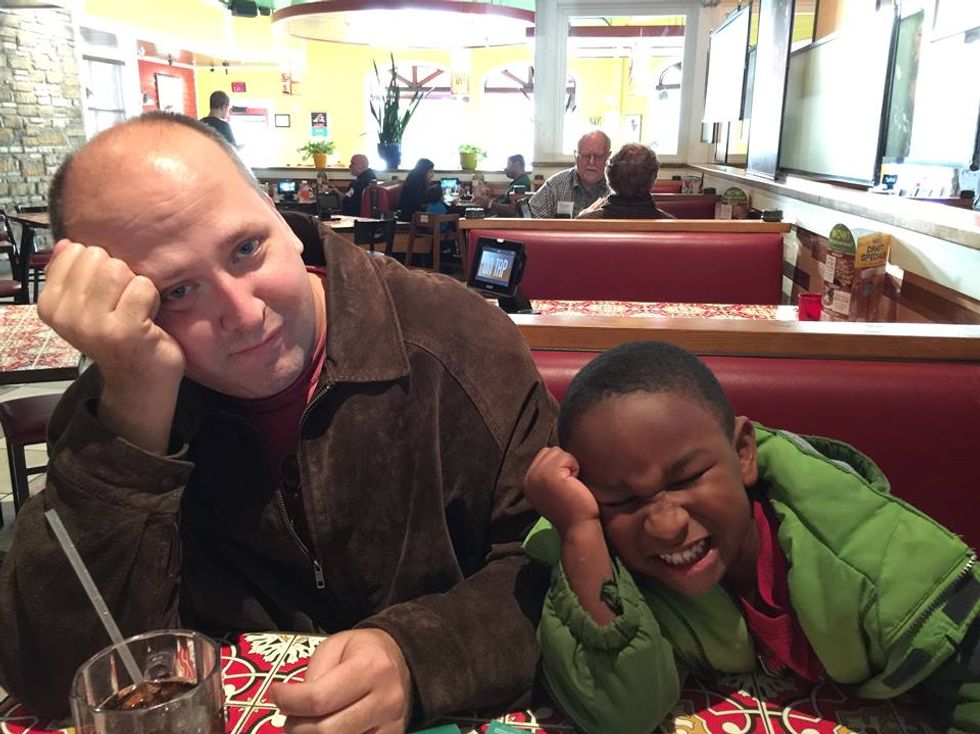 2014: Jaysen thought Chad and Hudson looked like Charlie Brown and Linus at dinner 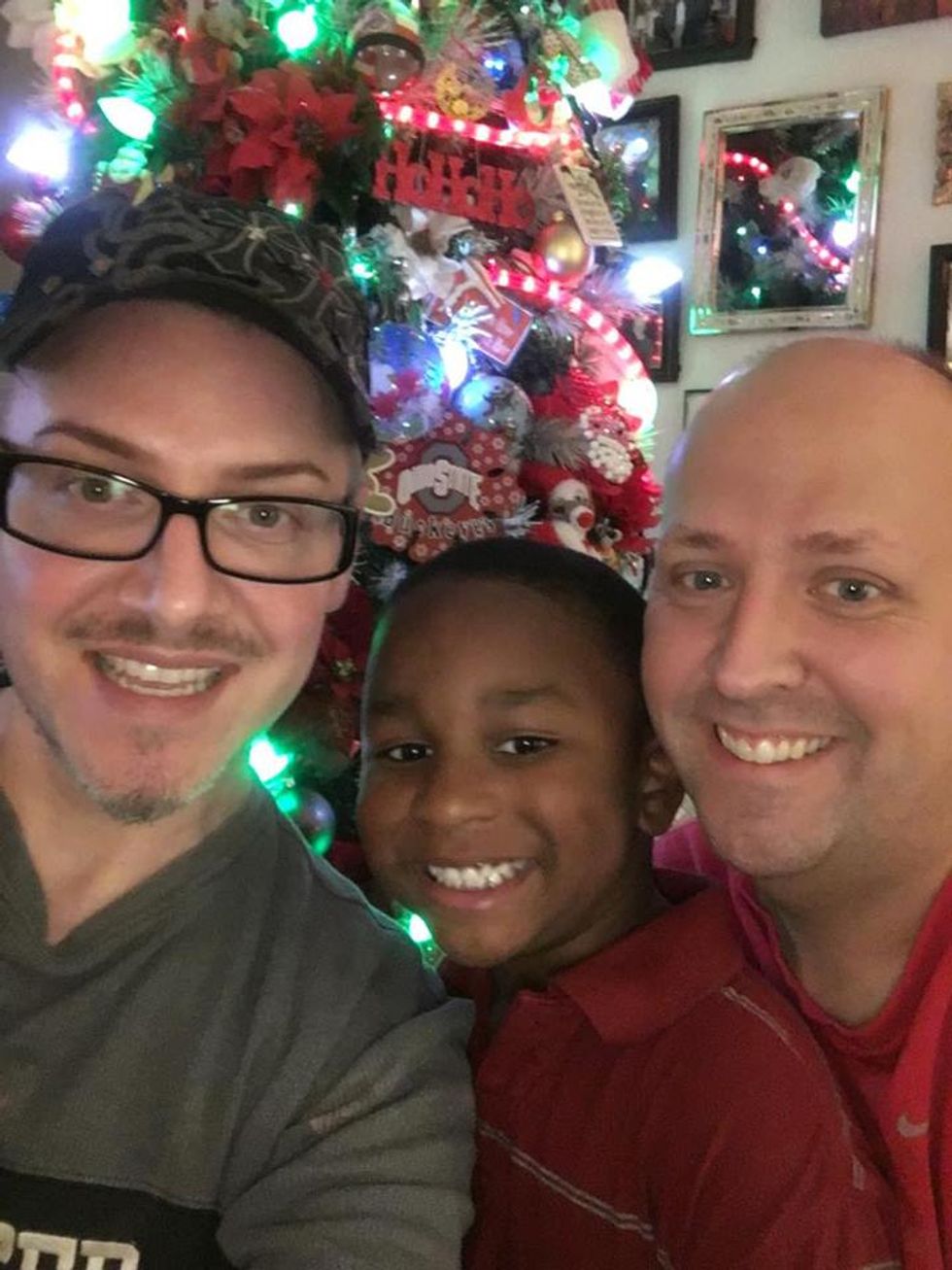 Today, Jaysen and Chad feel that all their hard work and determination has paid off. Chad is much happier now in his new job, and the dads are navigating life with their 5-year-old son.

We may be dads — but we're still gay, damnit! And these "gayest moments ever," sent to us from our Instagram community, prove it.

Did your child know all the lyrics to Madonna songs by age 3? Do your kids critique all the red carpet lewks from the Tony Awards? Do you often have baby food, diapers, sparkling white wine, gourmet appetizer, and fresh cut flowers in your shopping cart — all in one trip? If you answered 'yes' to any of the above, you just might be... a gay dad.

We asked the dads in our Instagram community to share their gayest moments as a dad, ever, and their responses were just as hilarious as they were relatable.

Here's a great way to start the week...

The Supreme Court agreed to decide whether cities are allowed to exclude tax-funded adoption agencies from foster care systems if they refuse to work with gay couples.

In 2018, city officials in Philadelphia decided to exclude Catholic Social Services, which refuses to work with LGBTQ couples, from participating in its foster-care system. The agency sued, claiming religious discrimination, but the United States Court of Appeals for the Third Circuit unanimously ruled against the agency, citing the need to comply with nondiscrimination policies.

The case, Fulton v. City of Philadelphia, follows a 2018 Supreme Court decision regarding a Colorado baker who refused to make a wedding cake for a same-sex couple. In that case, the court narrowly ruled that the baker bad been discriminated against, on religious grounds, by the state's civil rights commission. It did not decide the broader issue: whether an entity can be exempt from local non-discrimination ordinances on the basis of religious freedom.

The court — whose ideological center has shifted to the right since the addition of Justice Brett Kavanaugh in fall 2018 — may choose to do so now. Advocates quickly called on the court to consider the potential impact on the more than 400,000 children currently in the foster care system:

"We already have a severe shortage of foster families willing and able to open their hearts and homes to these children," said Leslie Cooper, deputy director of the ACLU LGBT & HIV Project. "Allowing foster care agencies to exclude qualified families based on religious requirements that have nothing to do with the ability to care for a child such as their sexual orientation or faith would make it even worse. We can't afford to have loving families turned away or deterred by the risk of discrimination."

"It is unconscionable to turn away prospective foster and adoptive families because they are LGBTQ, religious minorities, or for any other reason unrelated to their capacity to love and care for children," said HRC President Alphonso David. "We reject the suggestion that taxpayer-funded child welfare services should be allowed to put discrimination over a child's best interest. This case could also have implications for religious refusals that go far beyond child welfare. The Supreme Court must make it clear that freedom of religion does not include using taxpayer funds to further marginalize vulnerable communities."

The court may choose to override a 1990 decision, Employment Division v. Smith, which created the current standard for carving out religious exemptions. In that case, the court ruled that laws that target a specific faith, or express hostility towards certain beliefs, are unconstitutional — but this standard has long been abhorred by religious conservatives, who think it doesn't offer enough protections for religions. If the court does overrule Smith, it could have far-ranging consequences. " As noted on Slate, "it would allow anyone to demand a carve-out from laws that go against their religion, unless those laws are 'narrowly tailored' to serve a 'compelling government interest.'"

The four members of the court's conservative wing — Thomas, Alito, Gorsuch, and Kavanaugh —have all signaled an openness to reconsider Smith. The ruling's fate, then, likely rests in the hands of the court's new swing vote, Chief Justice Roberts.

For more, read the full article on Slate.

How Do Gay Dads Celebrate Father's Day Over the Years?

Coming Out to His Wife Was Painful, Says This Salt Lake-Based Dad of Four. But it Started Him on a Path of Authenticity