In 1993 Brian, then 28, and Ferd, 33, were both living in Boston. Ferd had arrived from the Netherlands to pursue his Ph.D. not even two years earlier and Brian had recently relocated back to his native Massachusetts after living in Florida for a couple of years.

As was common back then, the guys first noticed each other in the gym. (Mike’s Gym, for those familiar with the South End in the 90s.) While there certainly was a mutual attraction going on for several months, they didn’t really talk until one Friday afternoon, June 18, when they found themselves hanging out in the area along the Charles River known as the “gay beach.” They talked for hours and made plans for an official date.

Their date took place two days later on Father’s Day, following Brian’s visit with his parents in the ‘burbs earlier in the day. The two took in the movie “Jurassic Park” and followed it with huge slices of deep dish apple pie at what became their favorite gay restaurant in Boston, Geoffrey’s Cafe.

Later that night Ferd seduced Brian into coming back to his apartment with promises of Barbra Streisand CDs. As they were about to begin what would become their first big kiss, Brian disclosed his recent HIV diagnosis. (Turned out Ferd already knew; a mutual friend whom Brian had entrusted with the secret had already warned Ferd that Brian was “dangerous.”)

Ferd ignored the friend’s advice and, after that first night, the couple rarely spent a night apart. They made their relationship official by moving in together six months later in December.

Ferd started teaching Latin and Ancient Greek at independent schools in the Boston area; Brian began working at the Fenway Community Health Center as the coordinator for the Living Well series, focusing on HIV education and prevention among gay men.

In 1996, HIV treatment made enormous strides, with the introduction of protease inhibitors. Brian began taking this new class of medication in the beginning on 1996. Within weeks, his viral load had become undetectable. Within months, his disease changed from a death sentence to a chronic, manageable condition; his life expectancy changed from a few months to that of a healthy adult. The Boston Globe interviewed him in an article about the miraculous effect of these new medications. (The article was later reprinted in the Boston Phoenix.) But these advances in HIV treatment came too late for Danny, Leo and many other friends of Brian and Ferd’s.

After making frequent trips to New York City over the years, the guys decided to move tothe New York gay neighborhood, Chelsea, in 1999; a few years later they moved to Hell’s Kitchen. But not all was well: In 2004 they realized they needed to take a break from each other. Ferd moved out to Miami, and stayed there for almost two years. During this time, they kept in close touch and eventually managed to work things out and Ferd returned to New York City.

Duke only a few months old

The guys got their first taste of ersatz-fatherhood by bringing a Chihuahua puppy, Duke, into their home. They quickly realized that life was more meaningful for them by having another living entity to love and to take care of. Little Duke became the catalyst for the most important decision the couple made, the decision to start a family. (Sadly, Duke passed away at 10 years of age in October 2015.)

First they attempted adoption, but after a placement fell through they decided to change course and pursue surrogacy. And then many wonderful things happened in quick succession: In May 2009 they welcomed Levi, a 5-day-old boy into their lives, via adoption; in October 2010 Sadie and Ella, two girls born through surrogacy, joined the family. (Unable to obtain permanent residency in the United States, Ferd had left the United States in late 2009; Brian and Levi went with him to Toronto, Canada. The family would continue to live there until July 2015.)

Ferd and Brian with Ella, Sadie and Levi in January 2011

Ferd became the stay-at-home dad; Brian was able to work from home. During their early years of fatherhood, Brian started thinking about what would later become Gays With Kids. But having very young kids forced him to put it off for a few years.

On March 20, 2013, Ferd took Brian out to celebrate his birthday. But the big surprise of the evening was that Brian had enlisted the staff of the restaurant to help him propose to Ferd. Of course, Ferd said yes and they got married in front of their children, friends and family on June 20, 2013, which marked the 20th anniversary of their relationship. Here’s avideo of their wedding highlights. 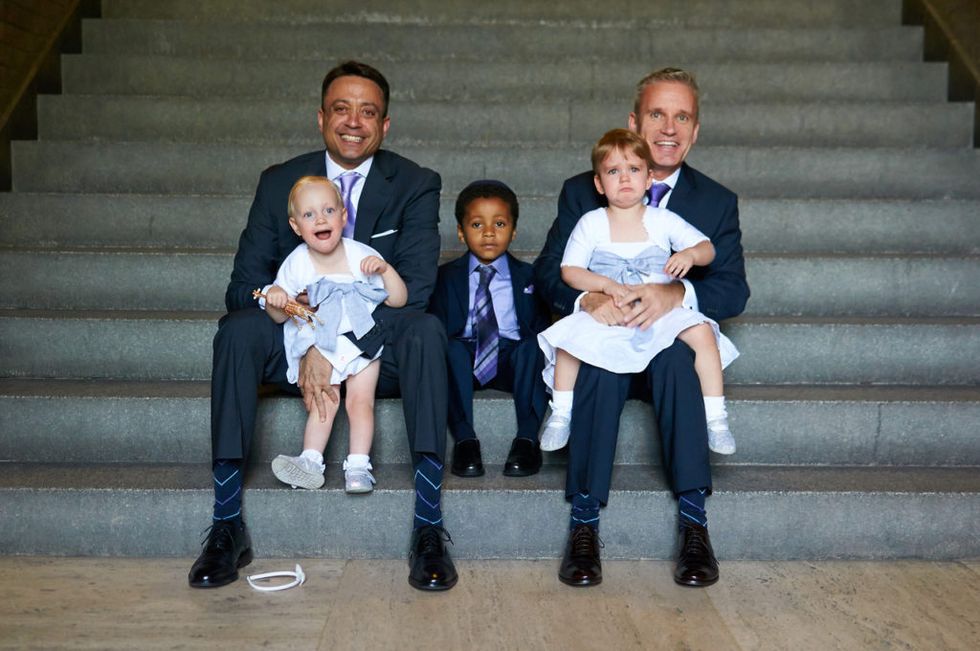 A few days later, the United States Supreme Court struck down important parts of the Defense of Marriage Act, and from that moment on, Brian and Ferd began discussing a possible move back to New York. And in July 2015, they did. The whole family now lives just outside of Manhattan. The guys take their kids to Central Park, the Brooklyn Bridge, Broadway shows, the Bronx Zoo, museums and other New York City attractions for kids as often as they can!

They love connecting with other gay dad families and are thrilled with the response to Gays With Kids, which launched in June 2014.