During Foster Care Awareness Month, Eric spoke about the importance of the foster care system on the Today Show with Jenna and Savannah.

Like many dads we feature on Gays With Kids, Philadelphia resident Eric Johnson always knew he wanted to be a father. His journey began in 2015 right after his relationship of five years ended. Although he didn't want to go through the process alone, Eric knew that this was his time, and after a few close to the heart conversations with close friends and family, he decided to take a leap of faith.

Eric worked for an early childhood education program that was fortuitously located in the same office as a foster care agency. Sitting in his office one day, Eric shared a revelation with his co-worker. "I said, I want to become a foster parent," Eric told Good Morning America in an interview earlier this year. "And my friend, my colleague, who was sitting next to me said 'talk to the lady behind you,' and I said 'behind me?' And she said, 'yeah, behind you.' So I turned around and asked and three people stood up and said here, we got one!" In December 2015, Eric began his foster parenting process.

After three months of attending certification courses, Eric became a certified Resource Foster Parent in March 2016. After a few months of not receiving any calls regarding children, his first foster child came in August. "It was a 3-day-old baby boy named Noah," shared Eric. "He was the most precious baby ever." Noah was only with Eric for two weeks until he was reunified with his birth family. Eric began to feel hopeless about ever becoming a dad. Then on December 8, 2016, 3-year-old Edward and 1-year-old Sincere, arrived. The young brothers had been in a few different foster homes over the past year. Although Eric had only been looking to foster one child at a time, the agency was reluctant to separate Edward and Sincere, as was Eric, so he agreed.

At first, it was a bit of an adjustment for everyone. "The first few days were challenging as they cried the first week they were with me," said Eric. "I had to literally sleep on the floor in their room in order for them to go to sleep." But gradually over the time the family adjusted and began to form an amazing bond. "As the months went on, the boys became more comfortable with their surroundings as I began to introduce them to people," explained Eric. "They were enrolled in school and met a lot of friends." Eric was able to share his love of travel with his son, taking them to NYC, Tampa, Orlando, Pittsburgh, Ocean City and Las Vegas.

Fostering Edward and Sincere, changed Eric in a profound way as well. "It has changed in a lot of ways that I only could have dreamed of. Since the boys have entered my life, I work a lot less and not be as stressed out from the challenges that come with it," he shared. "I believe that my kids taught me the power of understanding and patience. That we all have the ability to change for the better and how we can be more selfless and less selfish." 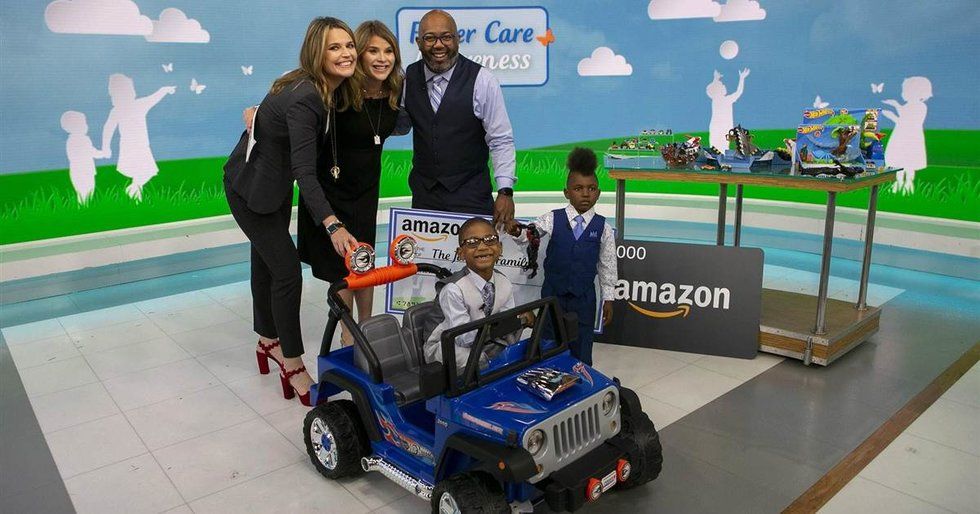 How fostering helped 1 man realize his dream of fatherhood

As time went on, the parental rights were terminated and Eric was given the opportunity to pursue adoption, and on February 27, 2019, Eric, Edward and Sincere, became a forever family of three. "The first day they walked through my door, was the day I knew they were going to be here forever," said Eric. "It was the best day of our lives. Not my life, our lives, because we are going to be together forever."

Throughout the Johnson's family journey, they have been on local news to discuss foster parenting and adoption, and for Foster Care Awareness Month they were featured on the Today Show with Jenna and Savannah.

"I love being a dad and the joy that my boys have everyday knowing that they have someone to love them unconditionally."

Keegan and Paul Schroepfer are believed to be the first gay couple to receive a grant through Best Buy's adoption assistance program.

Keegan Shoutz and Paul Schroepfer met at college in 2010, when marriage equality wasn't legal in their home state of Minnesota. Back then, kids were a far off distant thought. After the U.S. Supreme Court struck down DOMA in 2015, the pair married a year later and began discussing their future as dads. In 2017, the husbands began their adoption journey, and the long wait began.

Keegan, 31, works in public relations for Best Buy's corporate communications team, and Paul, 35, is a lawyer. Their journey to adoption took over two and a half years, and they describe it as "a LOT of waiting." The couple considered surrogacy but decided adoption was the right path for their family. The first part of their journey was focused on a pile of paperwork, in-person classes, and then social outreach.

Their nursery sat empty for a year after all their "homework" was completed.

"I first learned about Men Having Babies while searching the internet for insurances that covered surrogacy," said Joey Guzman-Kuffel, 40, a Marriage and Family Therapist. "As I researched our surrogacy options the Men Having Babies link popped up. When I clicked on their link, I learned that this awesome organization was bringing awareness to men wanting to have babies and the possibilities to do so."

Joey and his husband Rob Kuffel, 47, Protocol Officer for the US Navy, have been together seven years after meeting via OKCupid.com. They chatted for a week via the app, then graduated to a phone call which lasted 3-4 hours. "I always knew that I wanted to have kids and knew that I needed to be with a partner that wanted to have kids as well," said Joey. Rob felt the same way. The two were married in May 2014.

The First Ever "Gay Dads Day" Was a Smashing Success!